This trip has been fluid from the start. Alden and Sally W. were the only ones interested in going, thinking it was still the Castle Rock hike. I explained that it had been changed to the Chief Joseph area and we discussed options, then Alden made a counter offer. Spend Sat. night at their cabin up Rock Creek and hike around Skalkaho Pass on Sun. Hopefully down to Stony Lake, the source of Rock Creek’s Stony Creek. It seems that the following weekend they wanted to hike in to Stony Lake with their grandsons, staying with them at the cabin, first. They needed to go in to the cabin and get ready for the stay. It sounded good to us, so with steaks for dinner and our little grill, we set out, but we would have to come in from Philipsburg as Rock Creek Road was closed due to fires. Alden was concerned about a checkpoint on Rock Creek Road as we came in from Phillipsburg but all there was was two signs on the side of the road, one said “Road Closed” the other “Fire Activity Ahead” We considered ourselves local traffic and went on.

Partway up their 1/2 mi/0.08k driveway we met Alden walking and he said the electricity was out and he was checking the lines. He never found the problem. We went on to the cabin and Sally showed us our room and we unloaded. The cabin was small, compact but comfortable. On a bluff, surrounded by tall trees it was shaded and cool with enough of a breeze to keep mosquitoes down. We couldn’t see, but could hear Rock Creek below. We had plenty of flashlights so no electricity wasn’t that much of a problem, except it meant the pump didn’t work, nor the electric stove. We inventoried the water we had, we had enough for the evening and could get water for hiking at the Stony Creek Campground in the morning. They had a nice wood cook stove in the middle of the cabin but we didn’t want to use it because of the “set the woods on fire” thing. We cooked dinner, heating soup and water in a pan, in the middle of our little grill, grilling steaks around the pan. Sally made a nice salad, and plenty of it, we ate well. After heating wash water on the grill, Sally and I did the dishes out on the cabin porch, Alden got ready to go fishing, David forgot his fishing license, but upon looking in the shed he found a gas lantern. He oiled it up, put gas in, put mantles in, and on the wood deck of the wooden shed, he turned it on high and lit it. It burned nicely a minute or so then instantly the entire lantern was engulfed in flames, turning soot black. We all stood there watching it with visions of “setting the woods on fire” in all of our heads. David had shut the valve off and the fire burned down, he cleaned the soot off with some paper towels, turned it to low and lit it, it worked fine and placed on top of the wood stove gave adequate light for the kitchen and living room. We dug out maps and on the kitchen table got an overview of the area around the cabin and scoped out tomorrow’s hike. Alden wanted to go into Stony Lake from the Sapphire Divide above it, going up Crystal Creek, then come out the Divide trail to Skalkaho Pass, it was slightly shorter than going back down Crystal Creek. We turned in around 10:PM. With fires to the north and a big one to the south in the Anaconda-Pinlars, we had no smoke at the cabin, going out to use the outhouse in the middle of the night there were lots of stars, and with no mechanical noise of any sort, Rock Creek was loud,below.

They heated water on the grill for oatmeal and coffee for breakfast. We packed up and loaded and were on our way around 9:AM, stopped at the Stony Creek Campground for water, you had to drive through most of the campground to find it. On the Skalkaho Road, up to the Crystal Creek Campground we encountered a cow and calf moose in the road, got some nice photos, healthy looking animals. We stopped at the Crystal Creek Campground (6950ft/2118.36m) to let Sally out so she could start hiking up the trail at her own pace, she and Alden had walkie-talkies to communicate with. Then both drove up to Skalkaho Pass (7281ft/2219.25m) to leave the Tacoma there, and go back down to Crystal Creek in Alden’s car. Sally was planing on coming back down Crystal Creek and would stay there, with the car, until someone came down to get her.

The Crystal Creek trail started out as an old road that went up to what was once a camping spot where you cross Crystal Cr.for the first time, on logs or stones. It crosses Crystal Cr. several more times, and steadily gains elevation, but in the stair step fashion. You go up a little bit, then it’s kinda level, then up again. There was plenty of water in both Crystal Cr. and the small tributaries that were coming in. We saw lots of water flowers like monkey flower and both white and green bog orchards. Only one or two bear grass blossoms, the bear grass boom wasn’t down here. The higher up we went we saw “earlier flowers” like buttercups and lupine, though the glacier lilies were making seed. We were almost to the trail junction for the Sapphire Divide trail (7840ft/2389.63m) at 2 1/2 miles (4.02k) when we caught up to Sally. At the junction Alden found some deep shade and we had lunch, then started the 1/2 mile (0.08k) along the divide towards the junction with the Stony Cr. trail (7920ft/2417.06m), it went up and over a knob and here Sally decided to turn back, she would get in the 5-6 (8,05-9.66m) miles she was hoping for. The sign at the Stony Lake trail said it was a mile to the lake, the GPS would eventually say a drop of around 600 ft/182.88m in 3/4 of a mile (1.21k). The first part of the trail, switchbacks down the head wall, was a little scary, it was narrow, in places where rocks were in the trail barely wide enough to get a foot down. The trail curves at the switchback ends were steep, and slippery from fine powdered yellow-brown dirt, same color as the rock cliffs towering above us. Anyone with a big pack planning on using this trail would be advised to use trekking poles. But it was only for about100 (30.48m) feet of the drop, then the trail became more normal, still steadily down, but now following the lay of the land through mosaic burned grand fur stands, with little shade. We came up on the south end of the lake (7100ft/2164.08m), we all scanned it but saw no fish rising, but it was mid afternoon on a hot sunny day, maybe they were just staying cool. I sat in the shade to cool off and rehydrate, put on more sun screen. David and Alden explored the lake shore to the north, just a short ways to the west it was a steep cliff that came down to the lake. On the other side of a point they found the campground where the Stony Cr. trail came in from the east. Alden wanted to go down it a ways to scope it out. David came back to me and we started back up, taking advantage of the little shade there was to avoid over heating. Alden caught up with us just as we were going in to the switch backs, going up was a little easier then coming down had been. We took a short break, as there was more up to go, over that little knob to get back to the trail junction. The GPS said it was 1 1/2 miles (1.69k) to Shalkaho Pass, which was in a direct line, it was actually more like two miles. That two miles was almost equally divided into three parts, more elevation gain up to 8000 ft/2438.40m on the ridge top, along the ridge and then back down the other side. The down part started out nice enough, then came down into some very short, unpleasant -rocky and rooty, steep- switchbacks. Guess we found out why you never hear anyone raving about the hiking out of Skalkaho Pass, and why the Crystal Cr. trail is the better option to access the Sapphire Divide Trail north of Skalkaho Pass. Alden wanted to go ahead and get the Tacoma and go down and get Sally, and took off running down the trail. We could hear him start the Tacoma up, and we were only out about 10 min. sitting in the shade when they got back. We broke into the cooler for chocolate coconut water and juice and changed out of our hiking boots into river shoes before heading for Hamilton. We did a drive by photo shoot of Shalkaho Falls. There were two cars parked there with Texas and Washington plates, kids playing on the rock and in the water. At Hamilton, with only 46 miles (73.03k) to home we decided to just keep going rather than stopping for dinner. We’d be home by 7:PM, and had the Tacoma unloaded by 7:30, ready to just relax for the rest of the evening. 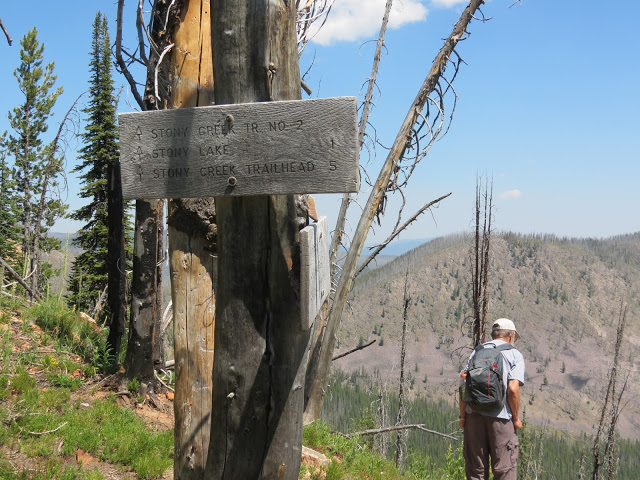 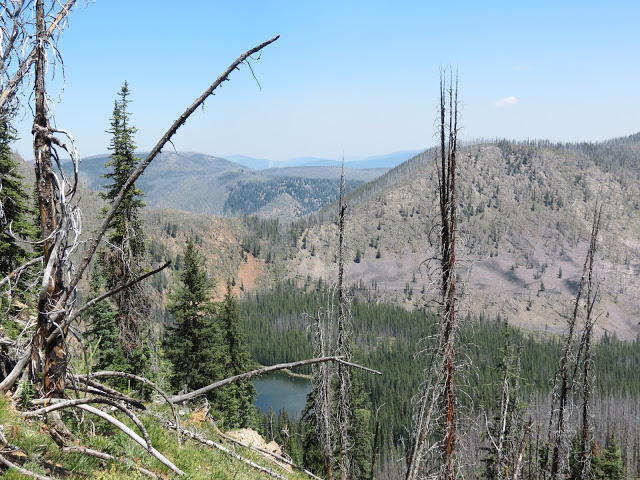 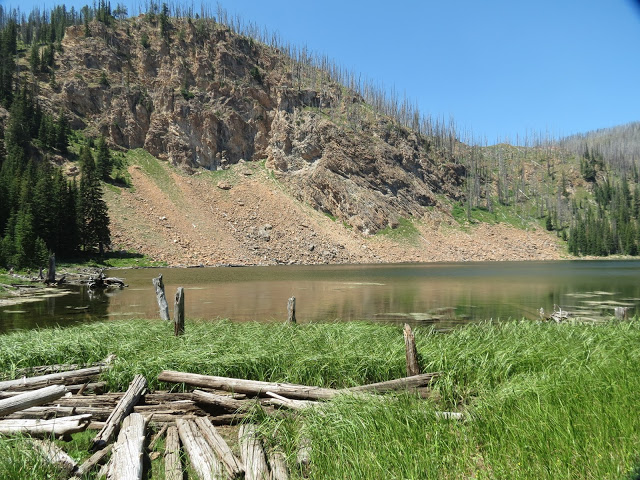 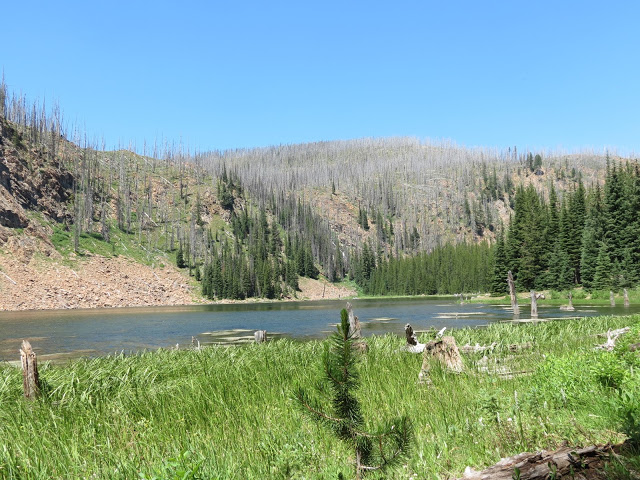 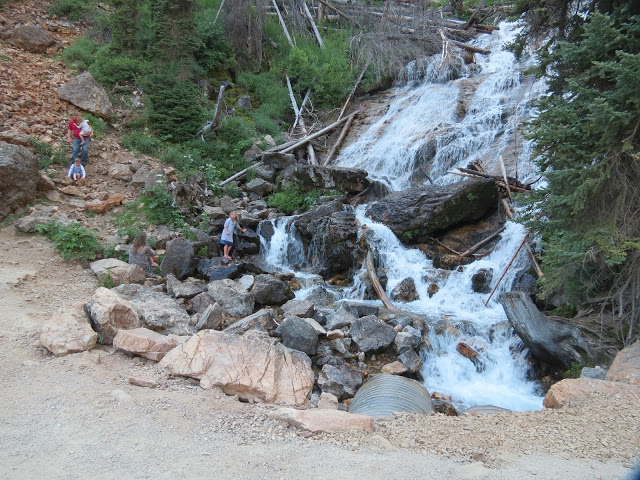