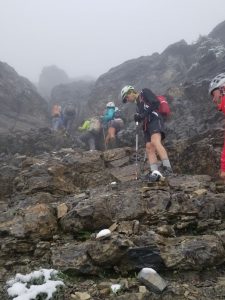 This large group of nine of us started out from Many Glacier just a few minutes after 7am. The goal for the day was the “Yo-Yo” Route to Ipasha Peak. However, we had awoke this morning to what appeared to be a decent amount of fresh snow in the high country, so we went into this adventure with an open mind- the likelihood of making Ipasha seemed low. This strong group set a brisk pace though as we moved up the trail and in less than two hours we were at Iceberg Lake (no icebergs!). Here we geared up for the steep climb up the headwall to Iceberg Notch. The route is all class 3 (maybe 4 in one or two spots) but with all the snow it was a wet, miserable slog upward. We really had to take our time and watch our footing. Everyone did fantastic though and as we topped out at the notch, the skies began to clear. However, as we looked down at out next leg of the journey (the hike down to Ahern Pass) we were concerned about the 3-4 inches of that new snow covering small unstable boulders. This took a while, but we all made it down to the Pass unscathed. While briefly resting at the pass we caught sight of a wolverine running across a pocket glacier that we had just descended under!

At this point the trip to Ipasha began to seem out of reach. We decided to head up to Ahern Peak and see what things looked like. As we ascended, we were soon engulfed by clouds. We had brief glimpses of the very impressive East Face of Ahern, but otherwise it was just a slow slog up to the 8750’ summit. Arriving about noon we quickly decided that a further traverse north to Ipasha would put us back in camp way too late, so we called this the turnaround point. We also decided we didn’t want to downclimb the wet Iceberg Notch headwall, so when we got back to Ahern Peak we shifted into trail running mode and took off down to the Highline Trail and then south to the Granite Park chalet area. The run/hike along this trail was beautiful and we even had to wait in one spot for a grizzly bear to finish getting off the trail before we could continue!

From the chalet area, we headed up over Swiftcurrent Pass and then down the incredibly scenic trail back to Many Glacier. We ran most of this until we all got tired of running and just hiked the last couple miles. We actually ran into the Shangri La group in the last mile and all finished together. What a great group this was today! Its not often that NINE folks can move through the mountains rapidly and all stay together. It was a lot of fun. Just a little under 10 hours; 24 miles; 8000’ of elevation gain.
Forest Dean 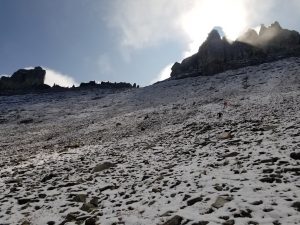 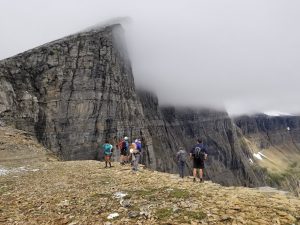 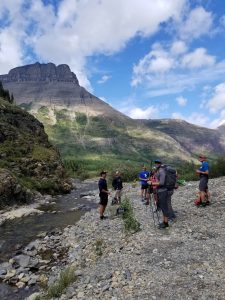