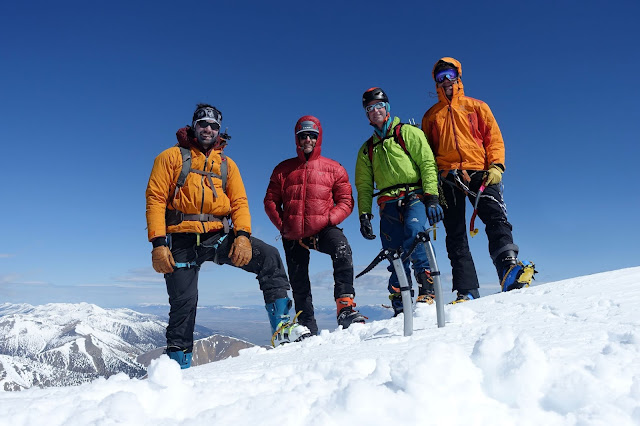 Date: April 26-28, 2019
Leader:  Forest Dean
Participants: Carl Sunderman, Fintan Maguire, Brent Maier
After failing on a chance for a summit attempt (due to weather) for the second time on this mountain back in January, I made plans to come back in the spring.  I knew the 800’ of summit block would make for a fun, steep snow climb and wanted to try it before it melted and became a third class scramble.  It did not disappoint!
Carl made the drive over to Missoula from his home in Spokane on Friday morning.  I picked up him and Fintan and then Brent and we were out of town by 11am.  The drive down on highways 93 and 28 and then two-track roads across sagebrush plains to the area we parked at (mouth of Bell Mountain Canyon) took just a little over 4 hours.  We began hiking up a mostly snow free road at 3:30pm at an elevation of 7600’.  About a mile up the road we ran into a summer “trailhead” and shortly after this point we donned our skis (8100’).  We skied up a ridge and then into a magnificent open meadow area with outstanding views of Bell Mountain (8700’).  Here we set up camp on a couple of feet of snow, ate some dinner and took in the surroundings.  With totally clear skies, the temperature started to plummet rapidly as the sun went down- Brent, Carl and I took a little ski another mile up canyon to the base of the NE face of Bell Mtn before retiring into our bags for the night.
We awoke cold and shivering on Saturday morning.  All of us had packed our summer bags to save weight (Brent, at least, brought a fleece liner- he slept cozy), which didn’t really do the job with temps in the mid-teens.  We departed camp at 7am.  We debated bringing our skis, but decided against it as our intention was to follow the gradual wind-swept East Ridge all the way to the summit block.  The snow was firm which made for excellent cramponing.  We gained the ridge and gradually made our way towards the mountain.  As we got within a quarter mile we had to decide whether to go straight up a mixed looking route on the east face, or head for a steep southeast facing snow couloir.  We opted for the latter and were soon looking up 800’ of steep, firm snow.  Using two tools and frontpointing, we made pretty good time climbing this gully.  I measured max grade to be about 55 degrees- fun stuff!  At the top of the gully we had a short walk along a narrow ridge to the 11,612’ summit and arrived a few minutes after 11:00am.  We relaxed in the sun, took pictures, ate some food.  Views were outstanding, particularly of the Lost River Range to the west and Beaverheads to the east.
At around 11:30 we began our descent.  Rather than downclimb the steep snow gully, we opted for three long double rope rappels.  This took a while with the four of us, but the day was beautiful and we weren’t in any hurry to get out of such a magnificent setting.  As we got to the bottom of the gully and out into the large open cirque on the SE side of the peak, we encountered predicted winds.  Gale force!  Estimated 55 mph- made for some challenging walking along the ridge at times on our return to our camp.  We got back to camp about 4:30, relaxed, ate food, drank wine/Fireball and got our tired selves into bed early.  Another cold night.
On Sunday we were able to ski about 2 of the three miles back to our vehicle and the exit only took about an hour and 10 minutes.  We stopped at Bertram’s in Salmon for a celebratory brunch before heading back to Missoula.  Another fun trip and great climb with great partners to one of the best kept secret mountain ranges of the Rockies!  Forest Dean
Forest Dean 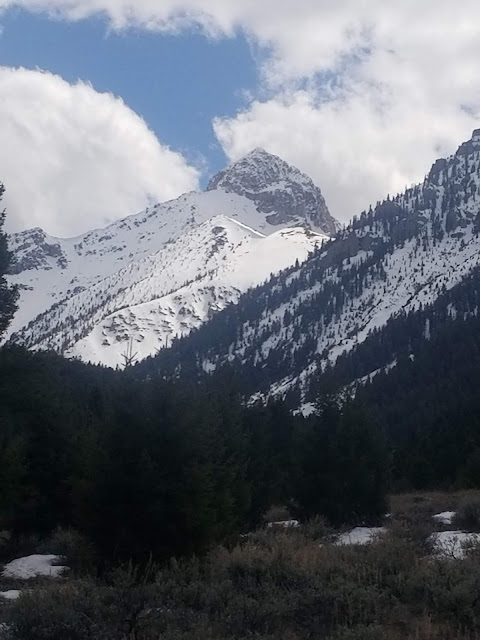 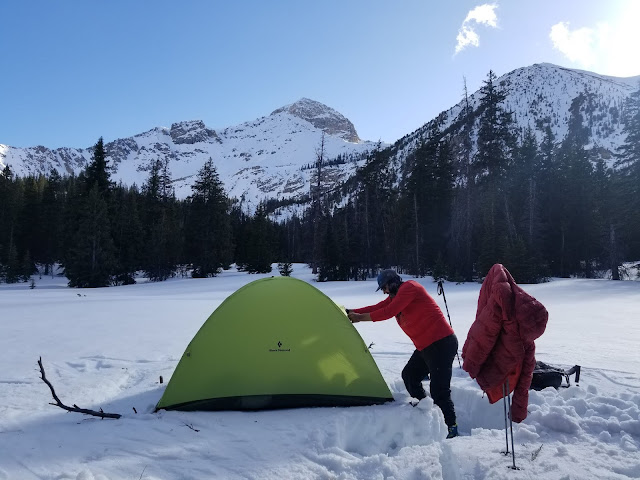 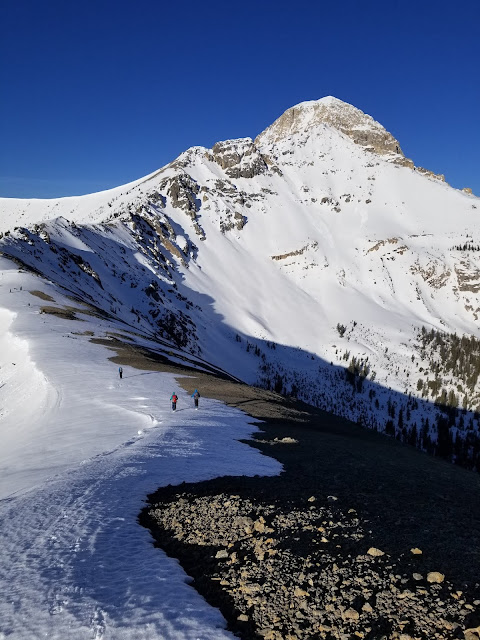 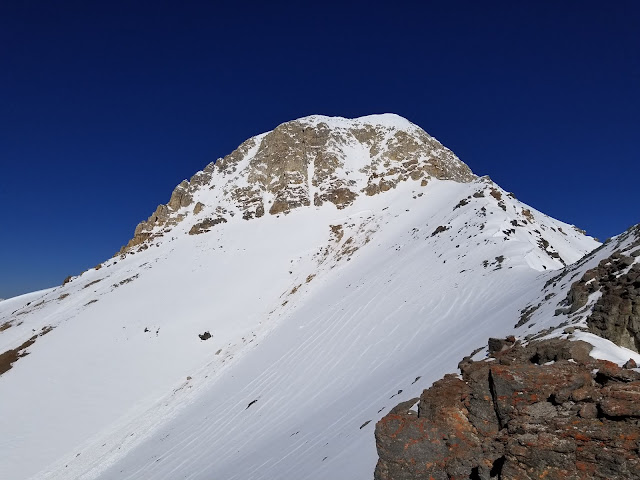 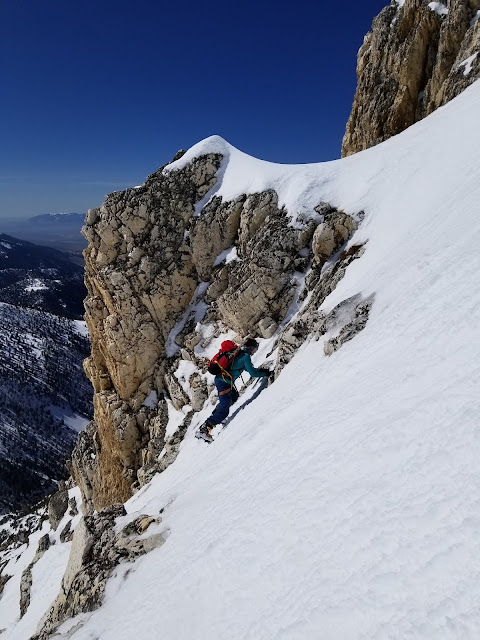 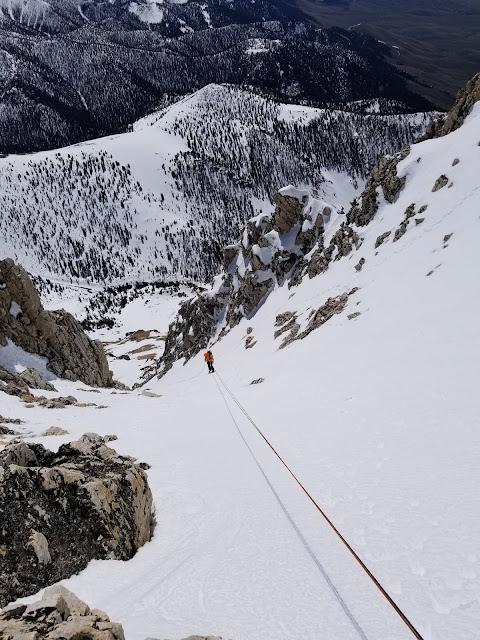