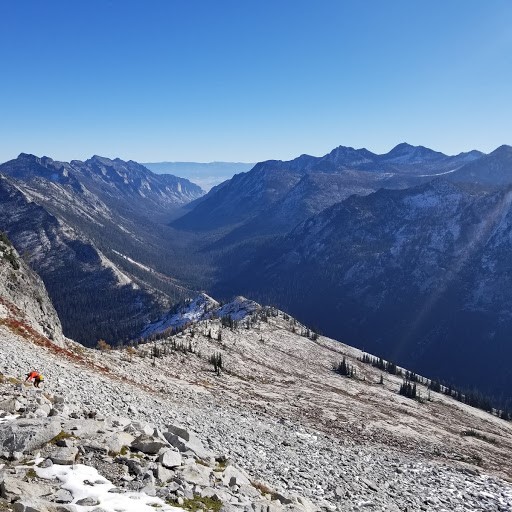 Date: October 20, 2018
Leader:  Forest Dean
Participant: Bryan Kercher
Bryan and I met at Mill Creek Trailhead at 6:15am on this starry skied Saturday morning.  We left a vehicle then drove over to the Blodgett trailhead and started, by headlamp, at 6:45.  We made good time alternating between hiking and running as we headed deep into the Bitterroot backcountry.  It was the first time either of us had been up the trail past the bridge.  The trail is very conducive to running- flat and well maintained.  At about 9:15 we reached the junction with the Blodgett Pass Trail (about 10 miles in) and headed up the switchbacks to the pass.  From there we followed the crest of the ridge (mostly slab granite) west to the base of Blodgett Mtn.  A direct ascent up the east ridge would require 5th class climbing- we did an ascending traverse along the base of the south facing cliffs until finding an easy break up the the SW ridge.  From there it was a 5 minute stroll to the broad 8647’ summit.
We took a few pics then headed back the way we came- to Blodgett Pass.  From there we began an ascent to the east up a ridge that leads to an unnamed 8600’ summit (possibly technical in nature?).  Our goal, however, was not to climb over this peak, but rather, we began a contour at about 7400’ across the south face of this mountain.  It wasn’t too bad (as sidehilling goes), but still tedious.  We rounded the SE corner of the mountain, grabbed some water from a stream, then headed up to an 8000’ pass south of Mill Lake.  Arriving at the pass we were at first stymied by steep cliffs on its north side, but as we searched for a few minutes we found an obvious ramp down through them (right at the lowest part of the pass, actually).  There was significant snow on the north side of this pass- we used microspikes to help with traction and made our way down towards the lake.  This took some time due to the unconsolidated snow covering boulders and route finding around and through another cliff band around 500’ above the lake.  We eventually made it (with a sigh of relief) to this incredibly ugly, irrigation drawn-down lake at about 4:30pm.
Thinking we now “just” had a mind-numbing 11-12 mile run out Mill Creek Canyon, we rounded the lake, consulted our maps/GPS, and searched in vain for the trail.  After a few minutes of trying, we found something that resembled a trail so we went with it.  Mistake!  Trail it was, but it hadn’t been maintained in probably 50+ years.  We would hike it for 30 seconds then it would totally disappear.  Since neither of us had researched this trail or area, we weren’t sure if it was a matter of the FS abandoning the trail or if they had rerouted to a different location.  We wasted a lot of time looking up and down, consulting GPS, etc.  Swore a bit.  Just as we were thinking it was going to be a long night, this old abandoned trail met up with a real one!  (We most likely didn’t hike around the lake far enough).  The long slog out began (last 45 minutes by headlamp).  We arrived, tired but content, at 8:15pm at the trailhead.
Bryan and I had different readings on our respective GPS apps- he had about 28 miles, mine said closer to 30.  Elevation gain was 6800-7000’.  13.5 hour day.  Not a cloud in the sky all day- beyond perfect autumn weather! 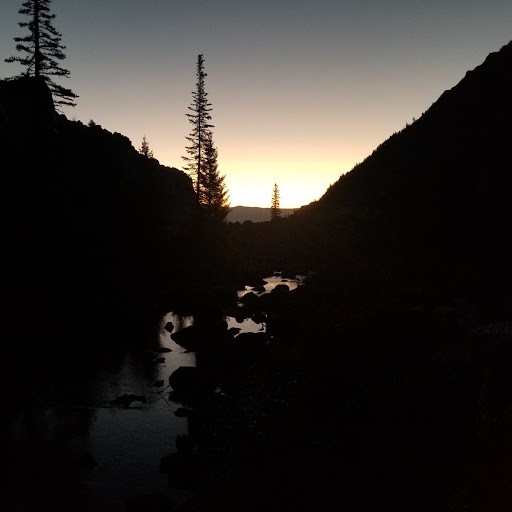 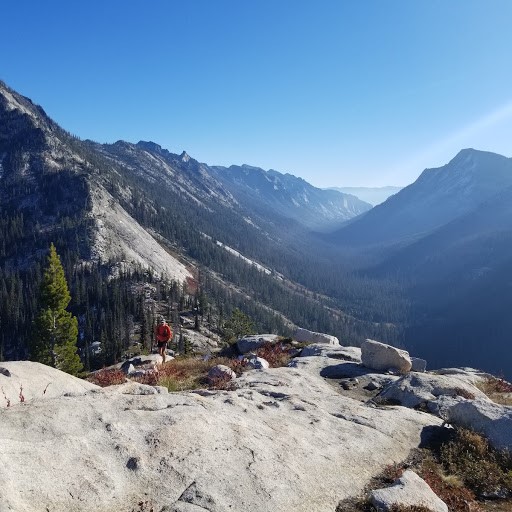 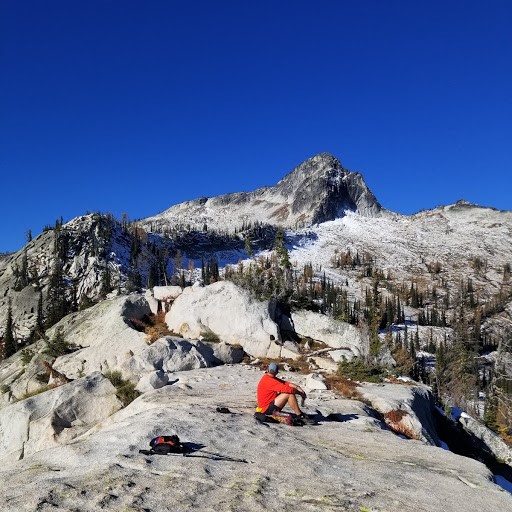 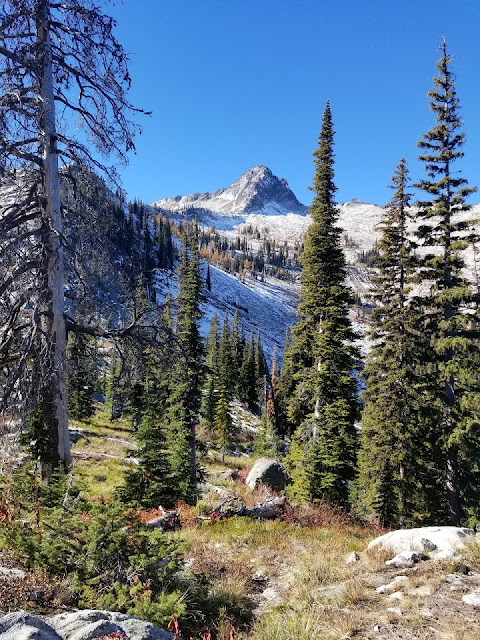 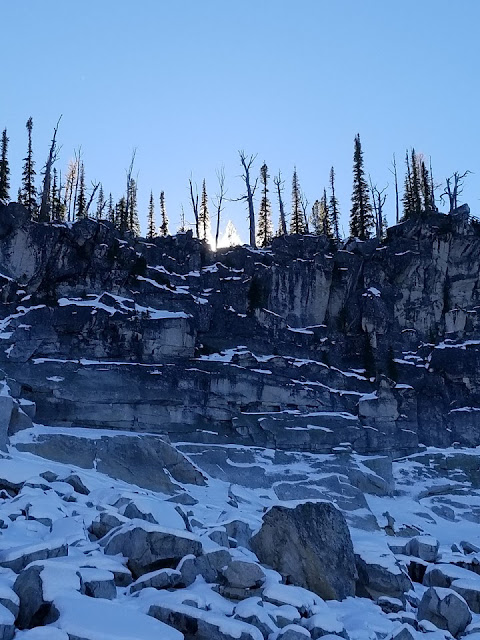