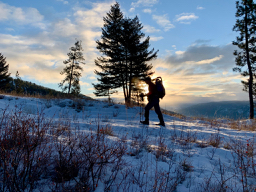 Date: December 28, 2019.
Attending:  Bryan Kercher, Laurel Vielle
Bryan and I started our hike right at 8:00 the morning of the 28th.  Parking at the far end of the town of Bonner, we walked several yards of Highway 200 to access the start of the hike.  Going around a gate, we walked the 1/2 mile or so of non-motorized use road to the point where a small trail leading up the Bonner “B” heads up the ridge.  And, up we went.  There wasn’t much snow at that point but the higher we got the more snow there was.  Though I didn’t make the summit, I had scouted out the area a few days before so we just followed my tracks up.  In preparing for this climb I knew private property was an issue and had heard conflicting information from several people about the status of public access on the mountain.  We made it to the top of point 4780 and that was the only area that may have been private property though there were no obvious signs and it was apparent no one had been in the area for a long time. On my recon and with Bryan, I felt secure that I was not egregiously trespassing on someone’s private property.  There are several logging roads crisscrossing the mountain so Bryan and I headed up the ridge basically cutting the switchbacks on the roads.  Closer to the summit we followed one road which had a snowmobile track on it because the going was much easier than staying on top of the ridge.  We had donned our snowshoes by then and the snow was getting nice and fluffy and deep.  To save mileage and time, at a switchback in the road we did head straight uphill to gain the ridge.  We ended up on another road again for a short time but it quickly petered out.  Then Bryan, bless his heart, broke trail for us all the way to the summit on gently undulating terrain.  The summit of Bonner Mtn is quite flat with excellent views north and south.  Though it was cloudy and wintry up there, we were treated to limited views of the Sapphires and Bitterroots to the south, and the Rattlesnake to the north. After a quick bite to eat and snapping a few pics, we headed back down the way we came.  We celebrated our fun day, a new summit for the both of us, with a beer at the Kettlehouse Amphitheater taproom which was conveniently located a hop, skip and jump away from where we parked. It was a great day with a great climbing partner.  It took us about 6 hours to go 10miles RT with between 3500-4000ft of elevation gain. 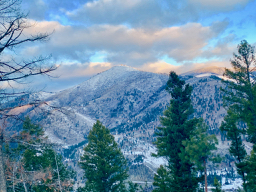 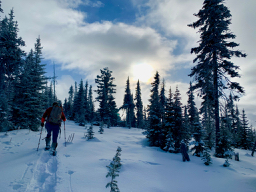 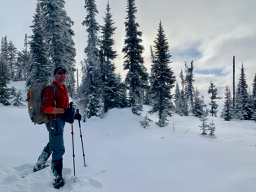 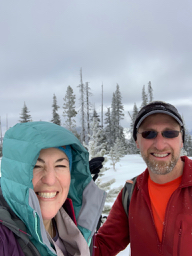