We did not see any marmots.  We did not even see the study area.

After meeting at the Walmart parking lot, Leyla Eraybar, Alden Wright, and Cathy & Jim Semmelroth pooled into one vehicle and proceeded to the Brushy Fork turnoff where Hwy 12 crosses the Crooked Fork.  We parked a half mile up that road and started looking for the trail.  Walking was easy on new logging roads for a half mile up to Pack creek, a tributary of Brushy Fork, and that is where the troubles started.

We found no workable crossing of Pack Creek and though we did find the Brushy Fork trail down next to the creek, it appeared maintenance was last done on it possibly around the time Mr. Birdseye found his marmot just upstream in 1910.  We considered forcing this approach to be untenable.  The silver lining was a discovery of beer cooling in Pack creek, but as it was still early morning and the beer was of the cheap industrial type, Jim was forcibly pulled away without sampling.

Thus the Brushy Fork Marmot Study became the Lee Ridge hiking outing. An enjoyable time was had by all.  We were able to push a route to 46.65472N & -114.53993W on the ridge, the route being the well-maintained but occasionally steep Lee Ridge hiking trail.  We had done about 1100’ over 4-5 miles and a couple miles wandering here and there on the Brushy Fork.   The weather was clear and hot so AC was welcome once back at the car at 2:30 to get back in time for previous engagements.

Cathy & Jim had previously investigated two other approaches to the marmot study area, both of which were found to be unpleasant and our hopes were pinned on the lower Brushy Fork approach.  In light of this outing we will now further investigate the route dropping down to the study area via closed logging roads from road 5671 about 8 miles out from Lolo Pass. 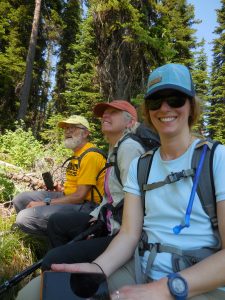