As is our custom everybody went up to the Chief Joseph Cross-Country Ski area in the morning. We meet in the warming hut between noon and 12:30 for lunch. Then set out on the afternoon’s adventure, all meet at the cabins we have rented at The Broad Axe in Sula, have a pot luck dinner, then go back up to Chief Joseph the next day. It turned out that everyone was in the parking lot, before anyone had gone back to the cabin, but we went there anyway and ran into a nice couple from Boise. Zona Linderman and Steve Schombel in Lois Crepeau’s vehicle had encountered big horn sheep on the road driving up, fortunately not disastrously. Fred Schwanemann was nursing a cranky ankle and stayed at the hut. Eileen Schwanemann skied near by. Lois and Steve snowshoed some up and down trails. Zona joined David and Julie Kahl on a longer ski, the ungroomed trails had several inches of light powder on them, making for delightful skiing on a cold -in the teens- day. We went first up to the top of the Gold Metal Trail, the highest point in the ski area, a nob on the Continental Divide, then dropped down on to the Vista View trail that runs the north edge of the area. Once named for the extensive views from its clearcuts, back in the 1980’s, the trees have grown back now and there are no longer long views. But it is still a nice trail that joins with the Lost Trail Loop that runs the west side of the area, back to the parking lot. We had made plans to meet at the parking lot between 4 and 4:30, we were a little late, and the last car in the parking lot, as the others had gone down to the cabin.

On the way down the road from Sula we saw some sheep and mule deer up on the steep slopes above the road. Didn’t stop to get pictures except that of an almost full moon over the ridges to the east. The slopes above the cabins, where we usually see sheep and elk, were still snow covered, and there was no activity up there this trip.But the west facing porch had an almost lace like curtain of ice-sickles hanging down almost to the porch rail. We had all pitched in for a hardy pot luck, had plenty to eat and good company for the evening. We turned in around 10:PM, Lois thought she heard mice running around and when David went to eat his breakfast found little holes in his granola bag, in an open tub we had left on the floor overnight.

As we were getting back to the ski area a little after 11:AM the next day, the snowmobile groomer was just unloading. Lois and Steve skied back to the hut, Lois stayed there, enjoying the hut, as Steve went out to ski some of the closer trails. Eileen and Fred joined them shortly, Fred was doing better today, but still rested. Eileen skied locally again. Zona, David and Julie rushed to ski Banshee before the groomer eliminated its nice blanket of powder. It wasn’t one of the “icy conditions almost out of control” skis we have sometimes, just a little slower with good control on the hills and in the curves. Now at the lowest part of the ski area, we needed to go back up the Joseph Trail -along Joseph Creek, to the main part of the ski area. We had allowed three hours for this trip, in case one had problems climbing. As we were waiting at the bottom the groomer came by, freshly grooming the Joseph Trail. It made for great climbing and we made good time up, to stop and take a break at the “Gray Jay” trail junction, at the top of the Joseph Trail and the Whooppee Trail. Now there are three gray jays panhandling for food. Known to take food out of peoples hands. We still had quite a bit of our alloted time left and rather than taking a shorter steeper trail up to the Timber Trail, we opted to go a little further east to the Sentinel Meadows Trail. Now with full grown trees it is no longer a meadow. We followed linked trails back, once again running into the groomer, so we could come into the cabin from above without having the climb Herringbone Hill. Everyone was there except Steve who was out skiing yet. We had some lunch, friends of David’s and mine came in with big packs to spend the night. When Steve got back, a little before 3:PM we all went back to the parking lot. It had been warm and sunny but now a stiff wind was coming up, not pleasant to hang around and chat, so we all headed home. No one had been disappointed. 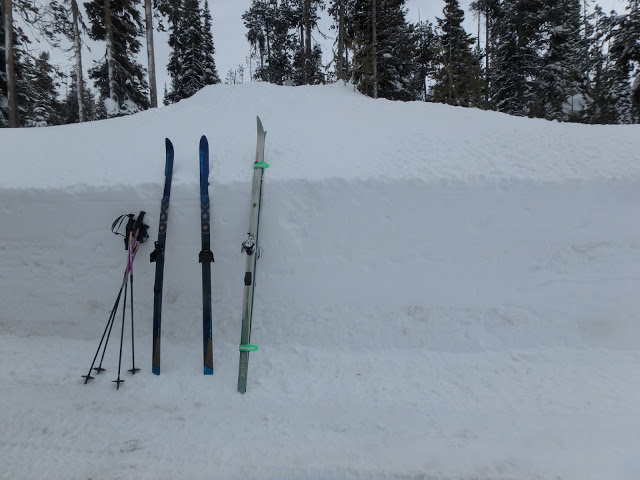 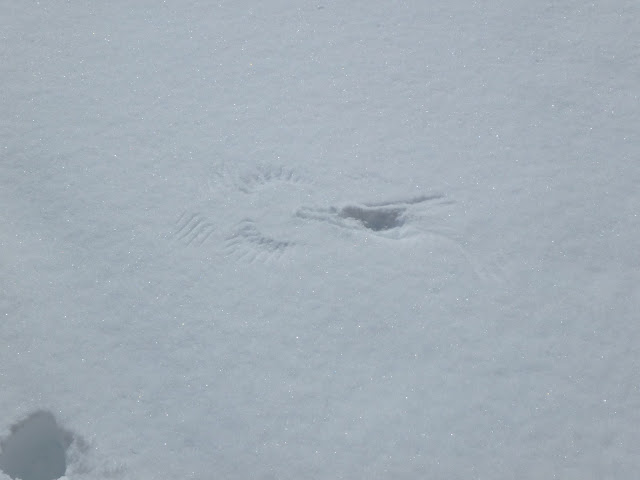 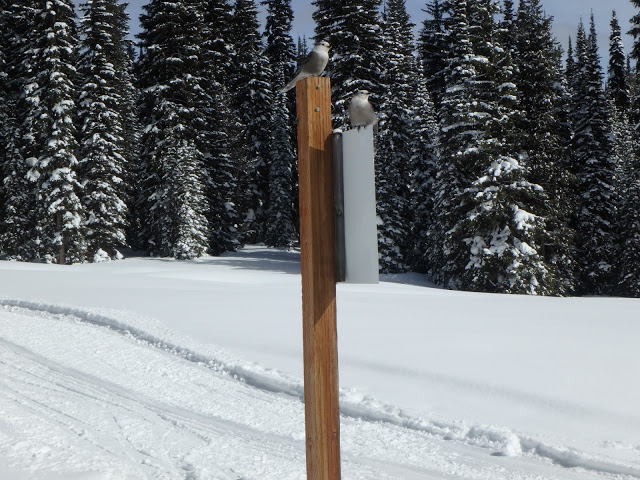 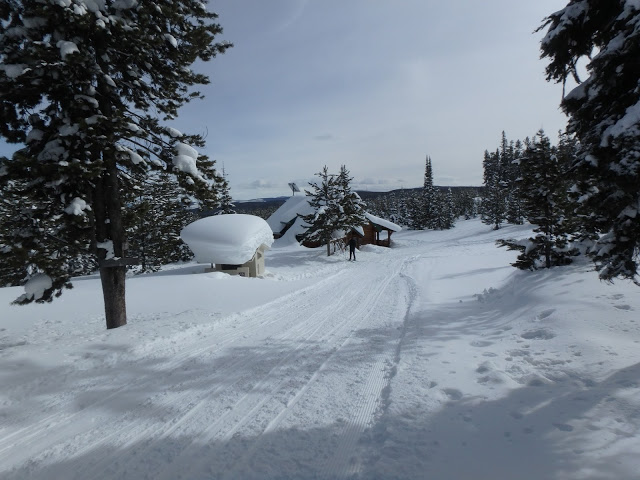 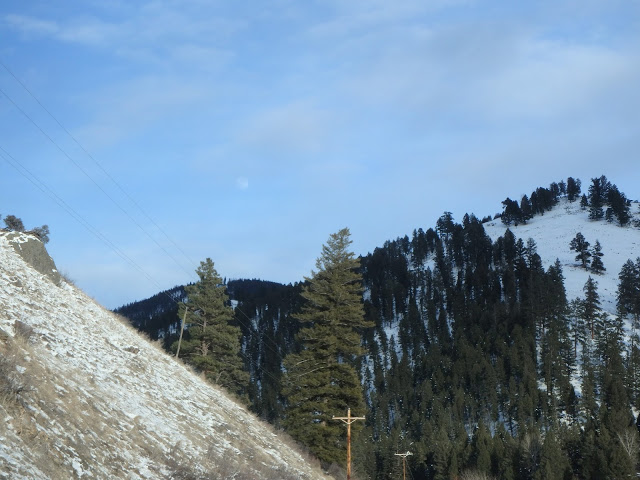