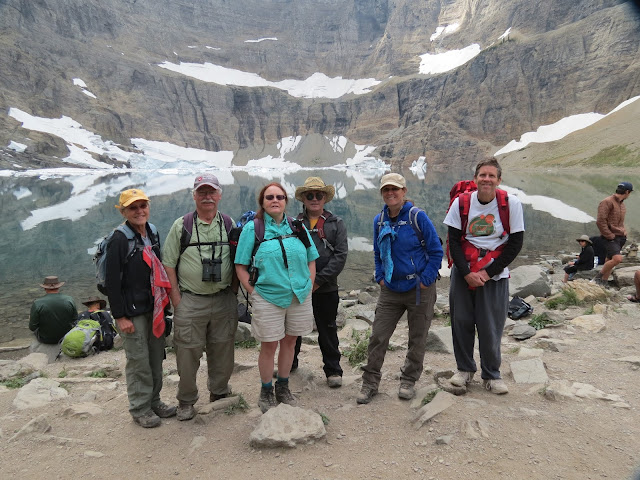 Like sometimes happens on my trips this hike got divided into two parties. Edna Blanchfield, Sharon Berube, Jim Goss, Steve Alverson, David and Julie Kahl, left the Swiftcurrent Motor Lodge Iceberg Lake-Ptarmigan Tunnel trailhead at 10:AM. Unbeknown to us Jen Bardsley and Monica Roscoe started the hike at noon expecting to catch up to us on the trail. We never met and later figured out that they were looking at a moose in Lower Iceberg Lake as the earlier party was leaving the main lake. I think this was the most traveled trail I have ever been on, seconded only by the first few miles of the Paradise to The Camp Muir trail on Mt. Rainier. Yet it still wasn’t unpleasent. The day started out cloudy and cool, a little windy and stayed that way most of the morning, perfect hiking weather.

Right out of the trailhead the trail climbs a few switchbacks, then levels out to more gradual climbing as it runs along the flanks of Altyn Mt., Mt. Henkle and Crowfeet Mt., above Wilber Creek, for a little over two and one half miles (4.02k). It crosses Ptarmigan Falls just before the trail junction between the Ptarmigan Tunnel to the north and Iceberg Lake to the southwest, tucked into the side of Mount Wilber. Wilber Creek starts where Ptarmigan and Iceberg Creeks join, just below the junction. Now in the Iceberg Creek drainage, the trail meanders up and down the flank of the Ptarmigan Wall. We crossed many dry, rocky water courses running steeply down the wall, waterfalls in wetter times. The high point of the trail comes just before you drop down to the bridge across the outlet of the lower lake. There people were stopped with cameras and binoculars looking at an area across the drainage, beyond Iceberg Creek, talking about a moose and a bear. A big bull moose in an open area kept looking over his shoulder at something that turned out to be a brown colored bear, who seemed to just be foraging in the same area. The moose stayed in its feeding area and the bear meandered on by going about its own business and putting distance between them. The rest of the party was ahead of us, so only David and I got to see the drama. A few feet further on was a meadow with blossoming wildflowers and others were asking us to ID flowers. We were now, like 10 min. behind the rest of the party, they had rested and eaten lunch waiting for us. We joined them just as a guy from Germany decided to swim in the lake-very briefly. After ohing and ahing over the lake and Iceberg Peak above us and taking pictures, we sat to eat lunch while Jim and Sharon wandered to the south side of the lake. Rocks falling from above alerted us to a mountain goat on a ledge just above the lake to the south, where Jim and Sharon were. Panhandling Columbia ground squirrels were being cute and trying to get into our packs when we weren’t looking. Even though there was a lot of people there, they were spread out on the shore and we didn’t feel too cramped, though it was hard to take pictures without getting people in them. Pictures we saw of the lake, from other times, had a lot more icebergs than were there now, but there were still some at the base of the snowfields across the lake. The weather had started to clear and the sun came out occasionally and gave a variety of light conditions.

When Jim and Sharon came back we got a couple to take a few group photos for us, we took a few of them and then headed out. David and I stopped to use the privy above the lake and the rest of the party went on ahead, they wanted to go to the Swiftcurrent Hotel and see the new grand staircase built earlier this year, on their way back. Both they and Jen and Monica would say something about running into sheep on the trail. As David and I passed the lower lake, we saw Jen and Monica out by the small lake, but didn’t realize it was them. At the highpoint overlook the moose and bear action was over but a doe and fawn were making their way through the area. It occurred to me that now the bear had had time to make it across the drainage to where the trail was, but never saw it again nor did we see any sheep on the trail. Further down, above, across the drainage, we could see sunlight shinning off the Grinnell Glacier, and with the shift in light now all of the -constant whitewater- course of Iceberg Creek was visible. Just as we were starting down the first of the switchbacks above the trailhead Jen and Monica caught up with us. We had a good laugh over how we could have missed each other. They had stopped at the main lake and one of them had gone swimming -but not for long. We all agreed it was a great hike, on a beautiful day. My GPS said 5.21 miles (8.38k) one way. 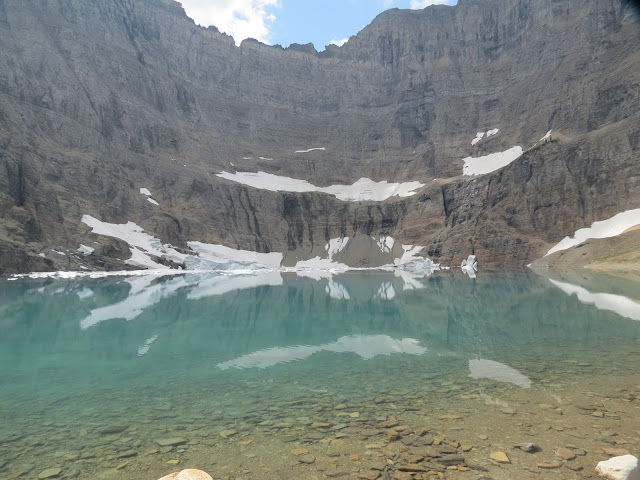 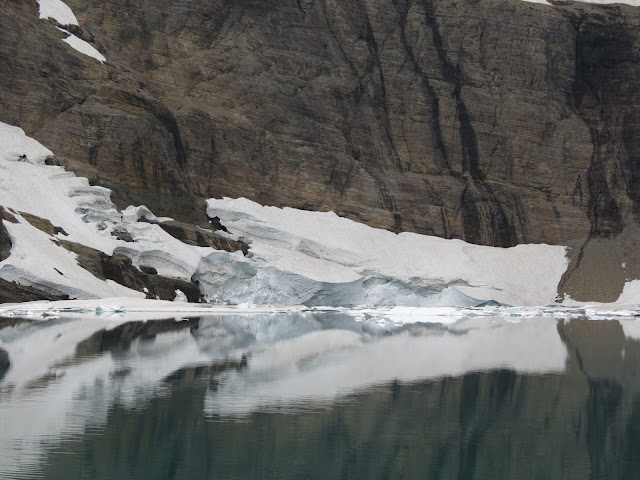 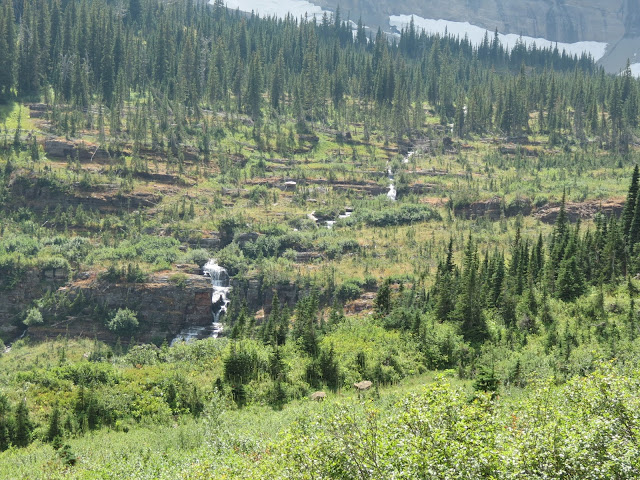