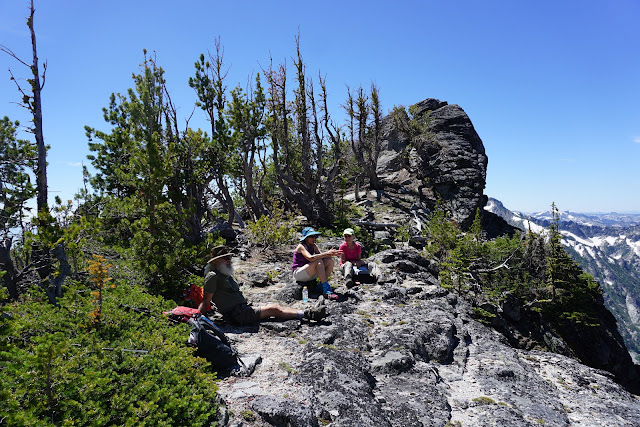 Date: July 14, 2018
I advertised this as a hike to Glen Lake and Point 8608 in the Bitterroots.  The four hikers were Edna Blanchfield, Todd Kaye, Alden Wright, and  LC Robertson (who signed up via the Missoula Adventure Crew Facebook group). Glen Lake is close to 2 unnamed lakes, and the Forest Service trail is now a loop that goes by all three lakes. The trail to the lake goes through the 2006 burn.  The trail had not been cleared in a few years, and there were a number of logs to cross.   On the way up to Point 8608 (also known as Glen Lake peak), we found the unofficial trail by going just north of the upper unnamed lake.   We avoided any steep snow by leaving the trail in places.  There were lots of wildflowers.   We reached the peak around noon, and I suggested the we continue on the ridge to the west.  Point 8618 in front of us looked like a challenging scramble with some steep snowfield crossings that we weren’t prepared for, so we chose instead to descend to Hidden Lake.  (This should not be confused with a larger Hidden Lake in the Powell Ranger District of the Bitterroot Forest.)  Part way down the ridge we noticed a large cairn and a trail that dropped down towards the lake (46.460 N / 114.3086 W elevation 8212).  We followed this very steep trail down to Hidden lake.   The lake is very picturesque and showed no signs of recent human visitation.   We retraced our route going out except that we visited Glen Lake which we had bypassed on the way in.  The hike was just over 10 miles with a conservatively estimated 4200’ of elevation gain.  Alden Wright 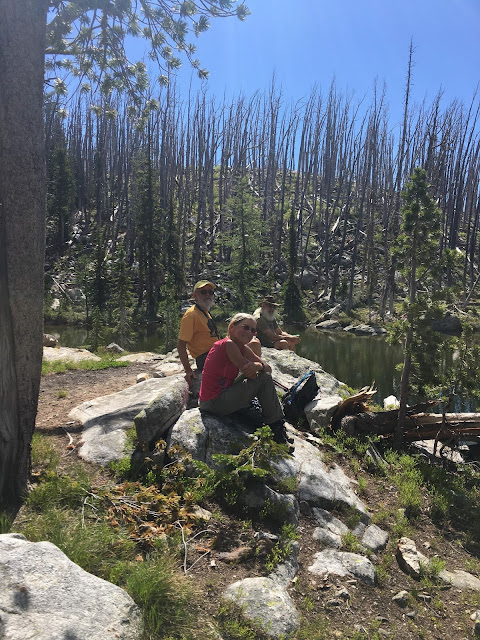