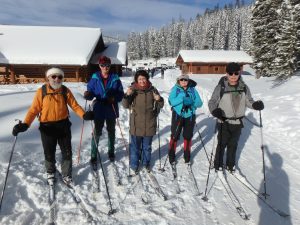 We met at 10:AM and went up in three vehicles, leaving Roy’s truck, big enough to transport five people and gear, at The Lee Cr. Campground. There was quite a few people there preparing to recreate, but there was barely enough snow down there to ski on. Above at Lolo Pass, it was an exquisite day for skiing, sunny, no wind and wonderful snow, as the half of Missoula that was trying to recreate at Lolo Pass on Sunday learned. It was the busiest any of us had ever seen at Lolo. Both parking lots were overflowing and there was still an endless stream of cars and snowmobile rigs coming in. We need to get a parking sticker, and it was close to noon when we finally started out. Nicole billed herself as a beginner, but it didn’t really show that much. She would fall and get back up, fall more, by the end of the day she had the getting up part pretty well worked out. It was her first time off of groomed trails, but we found the Lee Cr. trail had been tracked and that made for easy going. Seven miles/11.27k wasn’t anywhere near challenging for Alden so he got in extra mileage going back and forth on the trail and doing some side trips. We had lunch at the Lee Cr. Saddle, the smoothed scalloped snow there telling of the high winds the day before, then headed down the 4 miles/ 6.44 k of down hill. Once again Nicole did great, there was enough untracked snow (3ft -1m above) along side the track for us to get into to go slower in the steeper sections. As we got lower down the snow level dropped and there were some brushy sections but nothing too difficult. By the time we got to the gate about 1/4 mile/0.40k from the parking lot, the road was down to just some snow pack. Someone had driven back to the gate and had a fire, now we had some icy patches, but were almost out. We went back to Lolo Pass in time to get some hot drinks before they closed. Lots of places to park now. 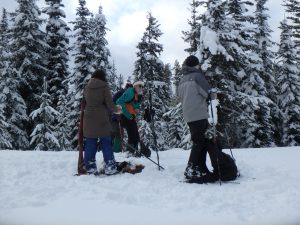 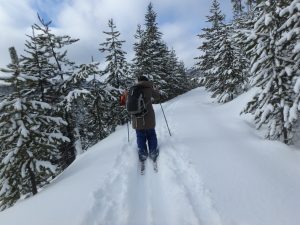 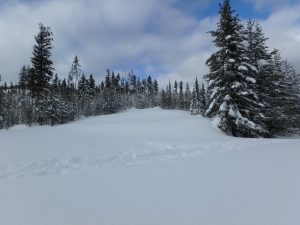