You know it was a successful trip when Alden comes back tired! But then he did several side trips, as we skied the 9 mile/ 14.48k round trip up to Moose Pass on the 13 mile/ 20.93k Moose Ridge Loop and put on 2 1/2 more miles/ 4.02k than the rest of us. There was a slight dusting of new snow on the still way-too-low snow pack, but skiing on the previously groomed road was OK, not too crusty, and traction was good for going up the 2 1/2 miles/ 4.02k of a climb to Moose Pass. First you drop down about 100 feet/ 30.48m going down to the lower Pack Cr. vehicle bridge, then up about 500 ft/ 154.40m to the pass. It started snowing just as we reached the pass and looked for a lunch spot. When I first skied this route back in the 1980’s a slope just below the pass on the Brushy Fork side had just been clear cut and allowed great views of the Brushy Fork drainage and surrounding mountains. Now it is grown up with 30-40 ft/ 9.14 m -12.19m trees, and there was no view. There was bare ground just above where we sat on a bank. Alden wanted to explore a road that went west from the saddle’s road junction, on the Pack Cr. side of the ridge. On his maps it looked like it just went aways and stopped, but snow mobiles had gone that way. He found it went  about 1/2 mile/ 0.80k and stopped, but there were several open spots with views. While Alden wandered David and I stared down, but David was cold and decided to go back up to the top to get warm and ski back down. We were in clouds now and couldn’t see the other side of the drainage. I went down slowly as to not get too far ahead and climb a lot if I had to go back up for some reason (it’s a trip leader’s thing). Going slow wasn’t a problem. Compared to one long ago trip, where from the time we left the pass and got to the bottom 2 1/2 miles/ 4.02k later and never took a step the entire time, this was slow. The low snow pack had left undulations in the road, repeated: short down hills with a slight rise, then down hill again, and even in the steeper sections where I expected to have to snow plow a bit, I just skied straight down. David and Alden caught up to me just before the steepest section and I had them pass me. Now we were below the clouds but it was still snowing. When I got almost to the bottom (the steepest part of the run) they were going back up that section for a second run. They caught up with me by the bridge and we took a short break before slogging the 1 1/2 miles/ 2.41k up to the Visitors’ Center. We saw moose tracks up close to the pass, and rabbit tracks every where, I heard geese. Lots of skate skiers passed us going both ways on the Moose Ridge Loop and several snowmobile parties. We all agreed it was a great day. All I want for Christmas is a 2-3 ft/ 0.61m- 0.91m dump of snow! 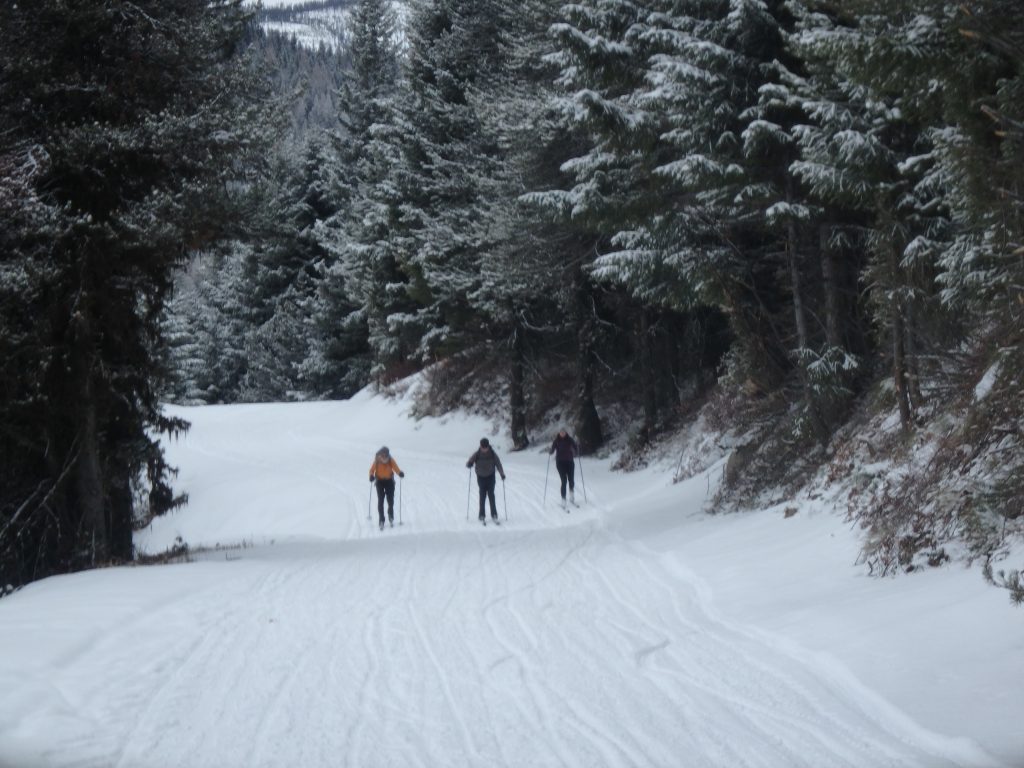 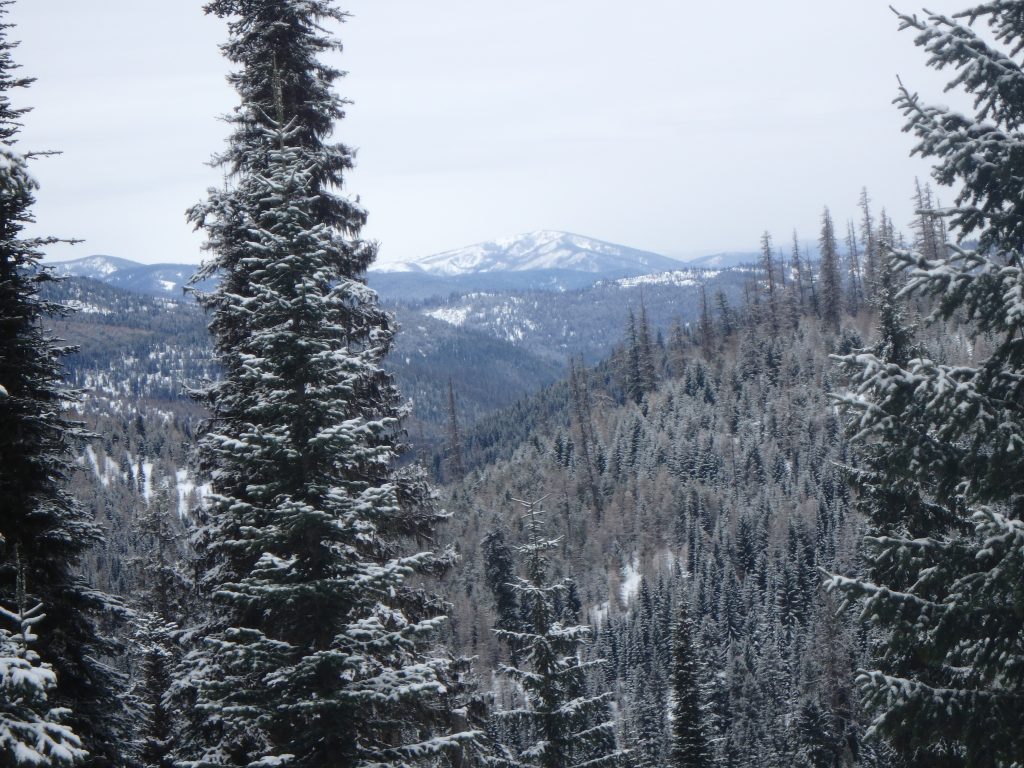 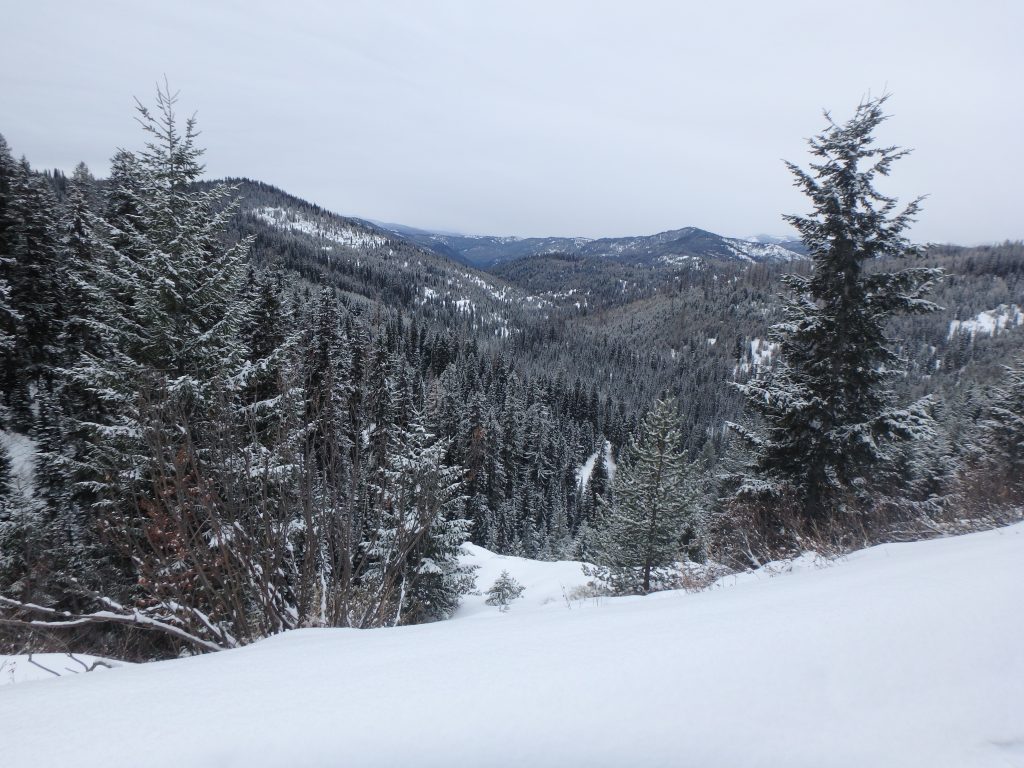 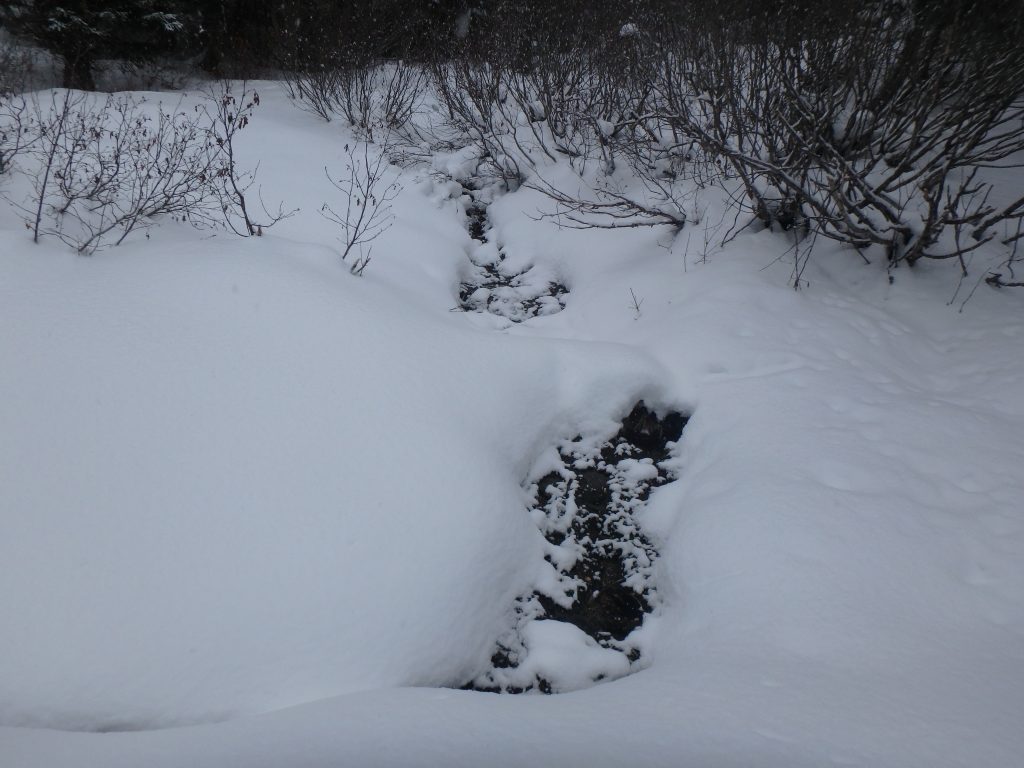