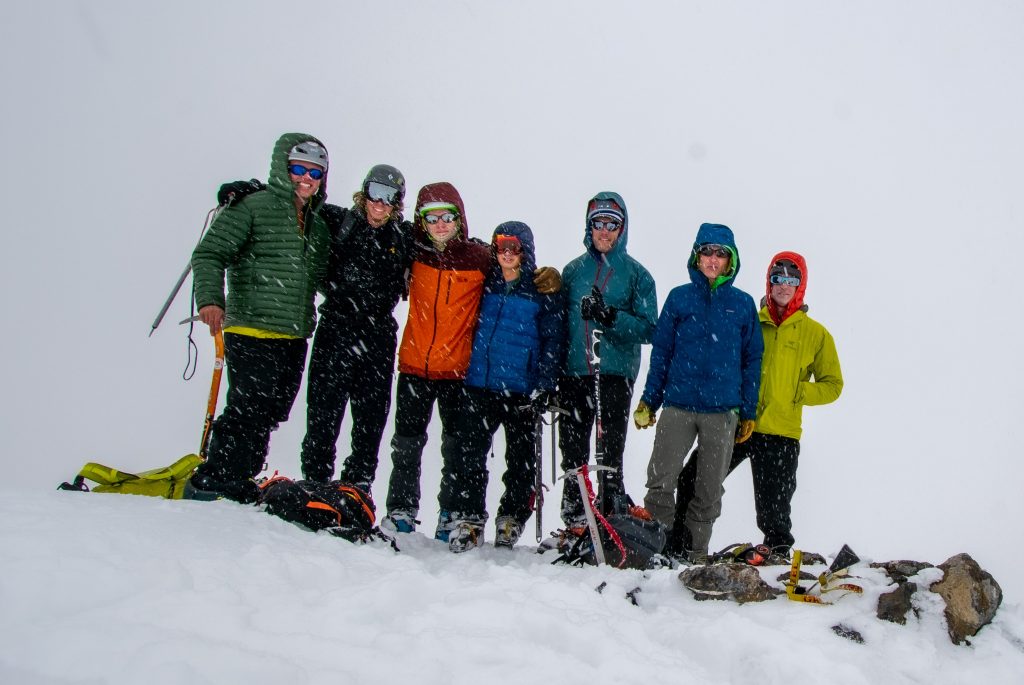 Last year a group of 8 of us spent Memorial Weekend in the Lost River’s and had such a good time that I decided we better do it again!  The word must have got out because 17 of us decided to make the trip this year.  The goal of the weekend was to climb and ski some of the 12,000’ peaks in the southern part of the main crest of the range and, of course, to relax and enjoy a good time in camp at the end of the days.  Notwithstanding one issue, it seems we accomplished the mission!

All of us arrived at various times on Friday afternoon and evening (except Brock and William who pulled in at 2am Saturday).  We set up camp, had some dinner and drinks around a nice fire and then hit the tents/trailers.  On Saturday morning the entire group (minus Maryellen and Simone—they had brought their horses down and a few hours riding the range) gathered at about 8:00 and we all hit the trail about 8:30am.  Well its not a real “trail”, but rather a user and game created trail that ascends relatively easily up Jones Creek.  From our camp at 7560’ we ascended about 800’ over 1.25 miles to a creek junction.  Here we split the group roughly in half:  Joshua led a group of seven (Susanna, Esther, Rhys, Adam, Jennifer, Leland) further up the main drainage for an attempt at the west face of Mt. Breitenbach.  I took the other 8 of us (Minot, Fintan, Frank, Seth, Sam, Brock, William) up to an attempt at Donaldson Peak and Mt. Church.  The Breitenbach group made it up to about 11,000’ according to Joshua before turning back due to unstable snow conditions on the wide open face of that peak.  The skiing back down into the creek bottom was apparently pretty good.  Meanwhile, the Church/Donaldson group made their way up and over a 10,000’ saddle then north into a cirque surrounded by the two peaks.  With Minot doing the trailbreaking we climbed to the base of a steep couloir that provides a weakness in some cliff bands and leads to a ridge connecting the two peaks.  After triggering a small slide we huddled below a small cliff and discussed whether or not to ascend the couloir.  Fortunately, the route up presented us with some firmer snow conditions and we were able to stick below cliff bands and ascend safely.  As we topped out at about 11,900 on the ridge it started snowing pretty hard and we climbed an easy but exhausting final 300’ up the ridge to the summit of Donaldson Peak (12,020’).  This was the first real alpine climb for both Brock and William and it was really cool to share that with them!  Being that is was already 3:00pm at this point and the weather was deteriorating, we decided against a trip over to Church (about ½ mile of broken ridge away) and descended.  Skiing was ok near the top, but things were pretty thin and we hit a lot of rocks on the way back to our rendezvous point from earlier in the day.  We hiked back out Jones Creek and everyone was back in camp by 6:30pm.

Good food, drink and campfire followed.  The evening was slightly marred by a drunken redneck who harassed the Maguire family claiming their horse trailer was blocking “their” road (we were on NFS land).  Other than that, we all stayed up too late and had a good time.  Leland regaled us with some fine poetry.

After a big day Saturday and a late night, most of us were moving slow on Sunday morning.  Some in the group had to depart for engagements elsewhere.  There was some legitimate concern about the snowpack.  This led four in the group (Joshua, Susanna, Jennifer and Adam) to stick to drier ground and head up to a 10,000+ highpoint on the ridge between Jones and Pete Creeks (Joshua packed his mini-wing and would proceed to fly back down to their camp).  The weather was so nice that seven of us just couldn’t resist the beautiful weather and decided to head up for an attempt at another of the 12,000’ peaks- Mt. Breitenbach (12,140’).  Leland headed out of camp about 9:00.  I left about 9:45 and Frank, Seth, Brock and William followed a few minutes later.  Minot really took his time and didn’t leave until a little before noon.  We all headed over to Pete Creek and then up this dry drainage to about 9000’ where we transitioned to ski’s.  We skinned straight up towards the south summit then bent to the east to gain the SE Ridge of the south summit.  Everyone (except Minot who was still behind) met up on the south summit.  Here, Leland, Seth and William decided to call it quits while Frank, Brock and I headed the approximate ½ mile to the north (true) summit, arriving about 3:45pm.  After a few pics we headed back the way we came, passing Minot en route (he summited around 4:15pm).  Everyone enjoyed a 2000’+ nice ski back to our earlier transition point then a pleasant hike out Pete Creek and back to camp arriving about 7:00pm.

We all spent one more night gathered around a campfire, although the mood was slightly subdued since we were all pretty tired.  Monday morning brought more really nice weather and most of us slept in before getting packed up and driving home.  Another fun Memorial Weekend Lost River trip! 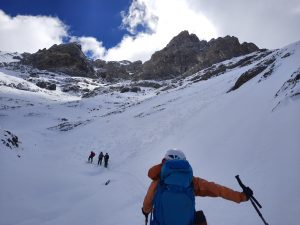 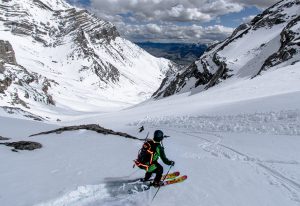