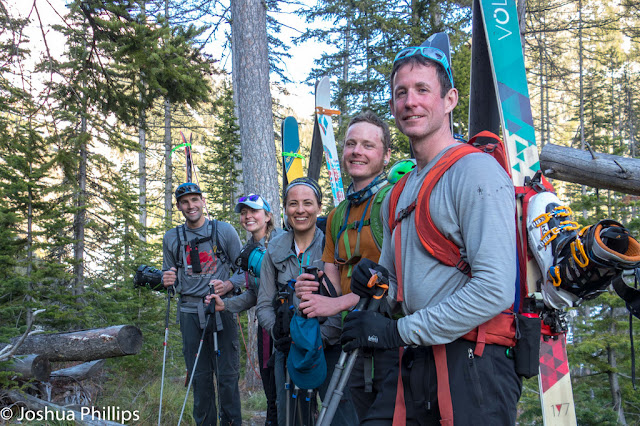 Date: May 11, 2019
Trip Leader: Joshua Philips
Brent Maier and I teamed up to co-lead this classic tour.  We had put it on the calendar a couple of months in advance and had many interested members in joining.  We capped the trip at 6 participants and put the folks that were on the “waiting list” in touch with each other.  Susanna Girolamo Phillips, Abby Maier, Tom Herwerden, Fintan Maguire, Brent and I were all motivated for a 5am meet-up at 7R.  The “waiting list” team consisted of Tom Jones and Casey Lammers.  They ended up meeting up at 3:30am to make an attempt at The Sheep’s Head and when we got to the Ashley Lakes trailhead, we found TJ’s jeep.  We left the trailhead at 7:10am and enjoyed the freshly cleared trail up to Ashley Lakes as the day began to warm.  We left our shoes at the lower lake and skinned around the south shore and scrambled up to the upper lake.  The southerly shore of the upper lake was choked with avalanche debris and our pace slowed as we navigated the icy debris and intermittently unsupportive snow.  Many large trees had been taken out in the latest avalanche; getting around the upper lake was a real challenge.  We donned our skis again and made our way up the ramp until the snow ran out.  After regrouping and getting some water up above the upper lake we were able to keep our skis on for the duration of the climb.
Several wet slides made themselves known by splitting the silence of the mountains with thunderous rumblings.  It seemed that the majority of the slides were failing on northerly aspects.  As we made our way to the base of the southerly flank of McDonald we took care to not loiter under any potentially unstable slopes.  Our group wasn’t particularly fast, but our tempo was steady and sustained.  As we reached the base of the summit pyramid, we grew increasingly concerned about the integrity of the snowpack.  Some of the snow we skinned through was turning to isothermic mush with no structural integrity.  Susanna opted to relax in the sun and watch the rest of us climb as she’d slipped earlier on some icy avy debris and scratched her leg.  She kept an eye on us as we explored the snow above and stayed in contact via radio.  The snow on the south face of the mountain was a bit slushy, but not isothermic and we continued up cautiously.  We were able to set a skin track all the way to the summit and forgo the typical boot pack due to the soft consistency of the snow.
As we reached the summit my phone rang.  It was TJ calling from just below the summit of Sheep’s Head!  We looked over and saw two figures on the stark white pyramid.  He was calling to inquire about the summit cornice as we a better view of its northerly overhang.  Turns out the “waiting list team” wasn’t waiting for anyone!  Casey and TJ had never climbed together and were putting together a terrific tour of their own.  After a short chat in blowing wind we got off the phone and layered up.
We sat on our packs and ate a quick snack before transitioning to downhill mode.  Tom put his splitboard together and carved graceful turns in the slush and regrouped with Fintan below.  Brent and I took turns offering words of encouragement to Abby who was not quite sure how to feel about the massive exposure of the south face of McDonald.  We linked our turns down to Susanna and all skied down to Ashley Creek where we were able to seek some shelter in the shade.  The sun had been so intense and we were feeling it drain us.
Brent looked up and caught a reflection on Sheep’s Head and discovered that we were again able to see Tom and Casey.  I called up Tom to check in on their decent plan and offered some thoughts on routes down.  We kept eyes on them until they dropped into the south couloir of Sheep’s Head and made their way out of sight.
The slog back along the south shores of Ashley Lakes was riddled with skis on/skis off, punching through the soft snow to our waists, and bush whacking with skis on our packs.  Once we got our trail shoes on our feet (and some more fried chicken in my belly) the rest of the egress when quickly.  Cold beers and coconut water was waiting at the cars for us as the mountains turned pink in the waning sunshine.  The mosquitoes discovered us while we chatted about the day and cut our time short before making our way down the jeep trail.
It was a great tour on the warmest day of the year.  I believe we missed prime conditions by about two or three weeks, but we made the best of it.  My day was made complete when I received a text message from TJ letting me know that he and Casey were down safe. 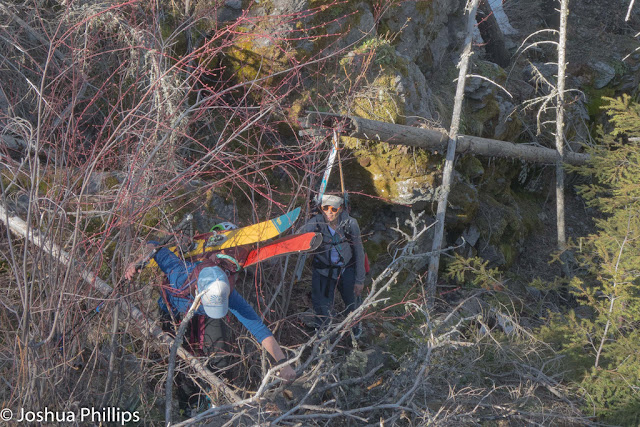 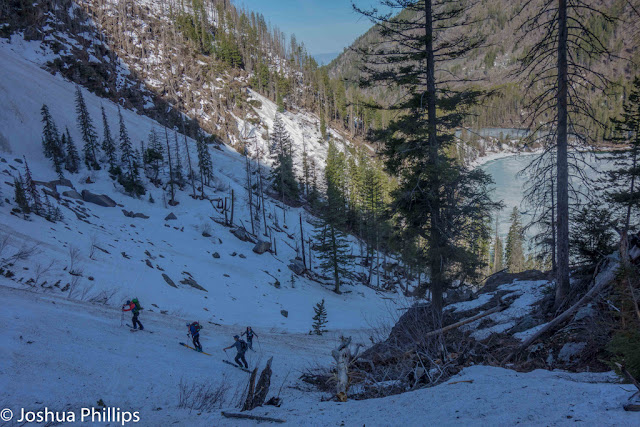 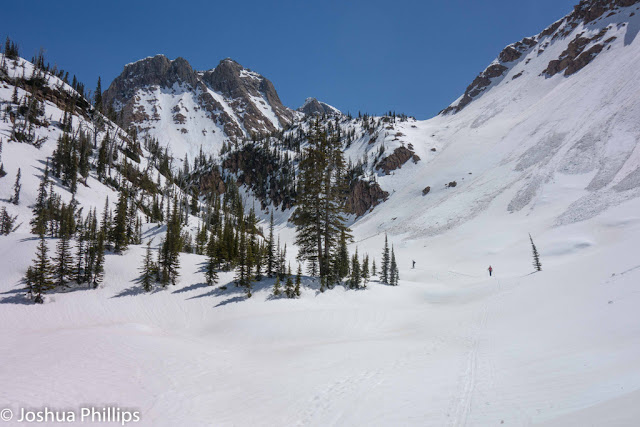 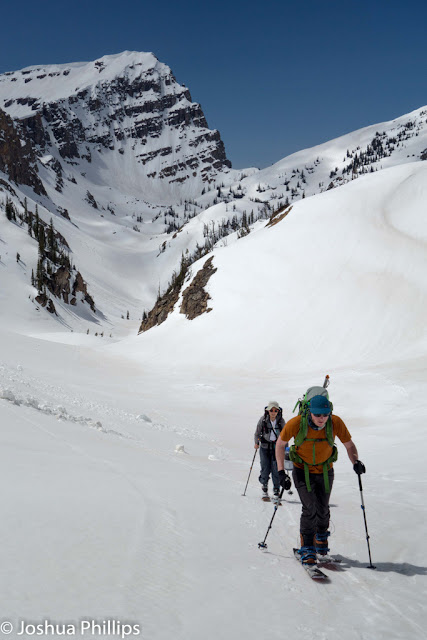 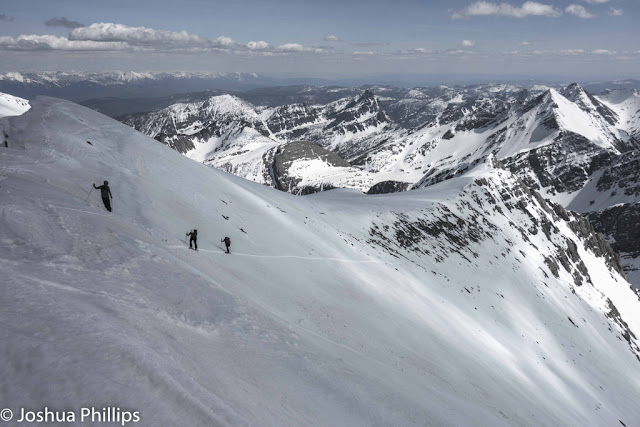 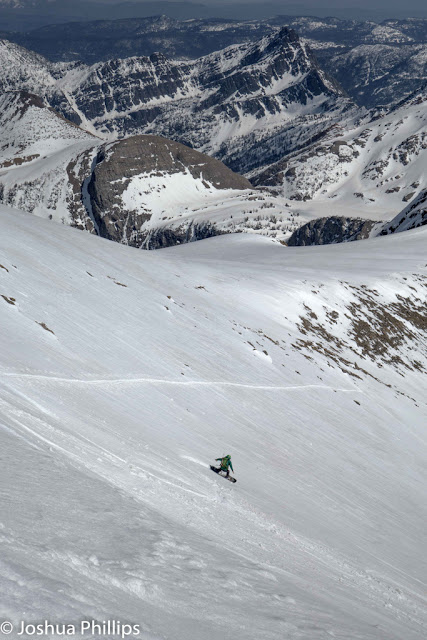