Other than to see a local sight, this trip had a secondary purpose to scope out this area in the Garnet Mts. northwest of Drummond for future hiking (or biking) potential. It was a visit back to an area that David and I had driven through about this time last year, and we were relying on GPS coordinates and memory to retrace our route. The main map aid was an old 2008 BLM map. We met Maria Cassidy and Lois Crepeau in town, and Lois went with Maria in her Subaru, Maria needed to be back to town by late afternoon. We were in our Tacoma and we all went to the travel Plaza in Miltown to met with Becky Roth and Gary Jones, and their three dogs, in their Suburban. Then we drove I-90 to Drummond to back track the 4-5 miles (6.44 – 8.05 k) on the frontage road to the mouth of Rattler Gulch, also known as Bradman. A short ways up the road is an old log house with a strange roof structure. Lots of speculation on why it is this way. A little further on you get to the base of the spectacular limestone bluffs that line this section of the canyon, by the interstate, just west of Drummond. There was a sign explaining about the lake bed formation of the Madison Limestone and we stopped. Gary remembered his Missoula high school classes doing field trips here to study stuff. From there the Rattler Gulch Road climbs up through the outcrop to come out on to the high hills and gullies of a former plateau. We passed through road junctions to King Mountain and Wildhorse Park, and the no longer “goes through” road down into the Black Bear Creek drainage on the Helmville side (east) of the Garnets. It was here we needed to start using the GPS to navigate. Other than that I had a way point from last year, my GPS became essentially useless, as it didn’t show the roads, or section lines or anything much useful -except section numbers. David and my GPS’s have different OnXmaps chips and his showed the section boundary lines, and more importantly property ownership and a broadly U shaped portion of public land on the south end of Sec. 28 that Nelson Spring was just next to. A road ran along the north edge of Sec. 28 and Sec. 21 to the north, and half way along it (1/2 mile, 0.80 k) was the loop road that went south, down past Nelson Spring. The correct route should show us as being in either Sec. 28, or 21.

In Sec. 27, to the east, we started tracking and came to a 3 way intersection that I remembered from the year before. The most traveled road was on our right, a somewhat less traveled road down the hill on our left (the Sec 27 Junction Lower Road), but I remembered us as going on the middle road, a muddy rutted two track. Giving it the benefit of the doubt we followed the most traveled right road which terminated in about 1/4 mile (0.40 k) by a house that was being built. We went back to the junction, but this little jaunt left a “tail” in our GPS’ track that became very useful. We went a short ways up the two track enough to make sure it was the correct road, it was, now called West Fork Of Rattler Gulch Rd. It seemed like it was only muddy for a short distance, then dry road, but then another muddy section, etc. We started watching for roads coming in from the left, the GPS saying we were in Sec. 21. A not very well used road came in, then in what seemed like the expected 1/2 mile (0.80 k) another road, better used, came in. We parked there, David’s GPS seemed to indicate that Nelson Spring was just “below” us. Lois stood in the shade of a small tree and noticed that there was frost in the ground. There were tiny bits of snow patches, and as we started down the road, which was dropping somewhat, there was crystal clear ice in the puddles in the tire tracks. The road wound around the west side of a ridge, in the sun, it felt good, but when we got around to a more southerly aspect in the shade or the sun went behind the clouds, it was chilly. After about 1 1/4 miles (2.01k) we came to a saddle where it was obvious that the road we were on continued across to some unnamed points across Mulkey Gulch. Mulkey Gulch comes down to the Clark Fork face, by the Interstate, between Rattler Gulch and Bear Creek, where the road to Garnet Ghost Town is. On the way in we had passed under a broad swampy area with running water we theorized was runoff from the spring. The GPS’s were indicating that we were in Sec. 20 and 29, way north and west of the Sec. 28 we needed to be in. We had lunch. Max, the lab, found a big stick with branches that when he was carrying it in his mouth made it look like he had antlers. Lois had her Flat Bob (Marshall) with her and we took photos. In the saddle was a four way junction. We decided on taking the least traveled road that went east, the way we needed to go to get to Nelson Spring. Probably less than 100 feet up this road was a second 4 way junction. The road on our left was little used and blocked off with a fallen tree, the one on our right more used, but going the wrong way, so we continued on the less used road going east. After maybe a scant 1/2 mile (0.80 k) it dwindled down to a track that seemed to end by a gully. Looking at my GPS it seemed to say that if we bush whacked a short distance we would come up on a road, that we could also see about 100 feet above us. We opted to climb up to the road above, where we got spectacular views. Northwest we could see over Morrison Mt. to the snow capped Missions beyond. To the northeast, maybe over Boyd Mt. to the Swans.

A few hundred yards east down this road we came to a bearing tree for a section corner and a very well marked property boundary, that included logs down across the road and a post in the middle of the road with a large no trespassing sign on it. Just beyond the road had been seriously kelly humped, just above the gully he had stopped at below, with about 30 feet (9.14 m) of road no longer there. It was around 2:PM so we deiced to turn back and dropped back down to our original road. In the road was a brush that looked sage like, but wasn’t. It had recently flowered and gone to seed with big fluffy puffs on the end of the branches, someone called it rabbit brush and maybe the “cotton tails” was why it was called that. We also noted on the lower side of the road a large rock of conglomerate, here in the Madison Limestone formation. Concrete is an artificial form of conglomerate, small stones stuck together by a matrix rock. Naturally occurring conglomerate usually is formed by mud flows or cooling lava. Both a liquid they tend to flow down hill and pool in low spots, like down river or creek beds with their gravel bottoms. At some point the lava cools so it no longer melts the rock it is flowing over, but now very viscous it just picks it up and gums it together in a granitic matrix. The dark color of the matrix rock seemed to say that was the case here. Further down, back through the saddle and on the way back to the vehicles we encountered both a black rock outcropping and pumice (cooled lava foam). We discussed finding volcanic features here in the limestone, that rocks sometimes got carried in icebergs in glacial lakes, like Ancient Lake Missoula (which was in this area). But we over looked the more obvious: hot magma getting injected into the cracks and fissures in limestone partially melts the rock around it and form cavities known as “scarns.” As the magma cools minerals and heavy metals settle out at different temperatures leaving pockets of deposits in the scarn. Heavy metals like the ones mined in the numerous mines just a few miles away by Garnet Ghost Town, and that had the entire 6 mile (9.66 k) lower section of Bear Creek hydrologically washed and dredged in the mid 1900’s, the dredge piles still visible on the landscape today. We were probably seeing the effect of that volcanic activity up here.
Back at the vehicles we opted to continue out West Fork Of Rattler Gulch Rd., rather then back track to Drummond. It would shortly join with the Gambler Gulch Rd. Gambler Gulch being a tributary of Deep Creek that comes out at Beartown, to join Bear Creek. We came to another junction that our memory told us which was the correct road to follow, now on the north aspect of a ridge, in trees, the road became long stretches of rutted mud, sometimes with standing water. One curvy section seemed 1/4 of a mile (0.40 k) long. We were concerned for the Subaru, but it did OK. This road “Y’s” into another road going south to Mulkey Gulch, going north on it a short ways it “T’s” into the Deep Creek -Black Bear Creek Rd. Three or four miles (4.83 k-6.44 k) down Deep Creek we came out at Bear Creek, by Beartown, about 3 miles (4.83 k) south of Garnet Ghost Town. We had snowshoed out of this area last winter. We met briefly, decided that as both Maria and Becky and Gary lived in Milltown, that we would meet at the Travel Plaza then Lois would go with us back to her rig. We were home in time to see the spectacular end to the Green Bay- Cincinnati game.
The next day I made some copies of the BLM map that I could mark on and sat down with the GPS’s to try and figure out where we had been. It turned out that the West Fork Road hadn’t run along the Sec. 28, 21 section line as we thought, but ran kinda diagonally across Sec. 21. The road we had walked was 1/2 mile (0.80 k) further north then the road we wanted. We were walking on the east rim of Mulkey Gulch, Nelson Spring was on the other side of that ridge. The saddle was the Rattler Gulch /Mulkey Gulch saddle. The road had wound around in Sections 20 and 29 before we came to the closed off road at the corner of Sec. 29, 28, 20 & 21. Progressing to the east this was the road that ran along the Sec. 28,21 section line, that the loop road to Nelson Springs came off of. The other end of the loop was the Lower Road, at the Sec. 27 intersection -where the house was being built. We had done the entire walk in Mulkey Gulch. It sure was pretty. And we did find many new places to hike or bike, -if they could get past the mud. The road we were on crossed the saddle and joined with a trail that went all the way to the Deep Creek Divide. King Mt. and Wildhorse Park offered more possibilities. 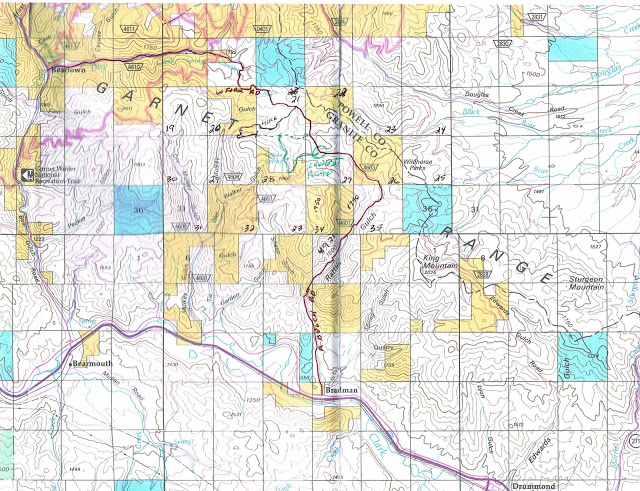 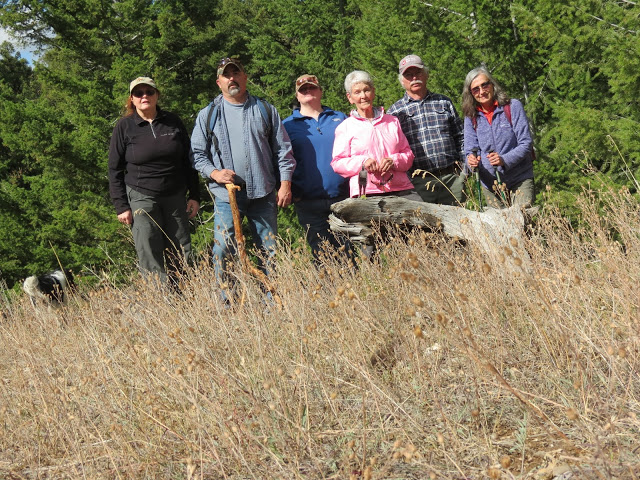 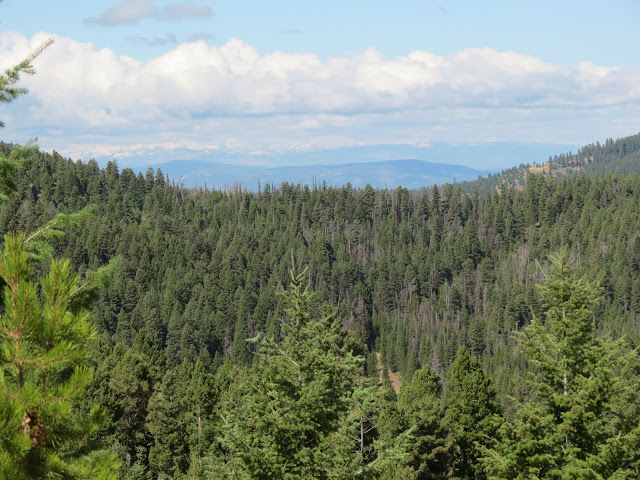