On Sat. June 5th, Steve came to our house at 2:PM and we drove in separate vehicles, on Hwy 200, to just west of Lincoln where the Dalton Mt. Road (FS RD 329) goes south. We followed the Dalton Mt. Rd, looking for the turn off onto the Sauerkraut Cr. Rd. One road seemed likely, but the only signs we saw were ones with the single number “9” on them. We drove until we found ourselves at the Dalton Mt. Saddle where Trail 404, goes 4 miles/6.44k across a ridge to the Sauerkraut Cr. Saddle, where we planed to camp and hike roughly 1 1/2 miles/2.41k to the Ogden Mt. summit. We doubled checked things on the 2006 Helena Forest Map (the most recent one), then back tracked to the same road with the number “9’s.” Now high up on a tree trunk we saw the small road sign that was the correct road number 1892. It was around 1/ 1/2 miles/2.41k to where the Upper Sauerkraut Cr. Rd, that would take us up to the saddle turned off. Watching my GPS I discovered that at that junction the road that went up was the continuation of Sauerkraut Cr. Rd., but the one that went straight at the same elevation was now Moose Cr. Rd. As we drove I tried to figure out what the Number 9 thing was about and noticed that it was the seasonal closure code for the gated roads in this area. With the map spread out in the truck cab, of course the code list was on the other side of the map, and it turned out that the roads that I thought had opened on June 1st, didn’t open until June 30th. Maybe that had changed since 2006. On the way into the road junction we came across a couple on a side-by-side ATV with two dogs. We got to the road junction with Upper Sauerkraut Cr. Rd. and saw blow down over the road. There was a second junction just a short ways up, where the gates were on two roads. David and Steve walked up to check it out, got just to the junction and turned back. Meanwhile the ATV had come up and turned up the road. Just as David and Steve got back to the vehicles, the ATV’ers came back out to warn us that they had just seen a sow and cub bears. They though we had planned on hiking the road, right now. She said it was a very large black bear, he said it had a hump on its back. David and Steve hadn’t gone far enough to see any gates so the ATV’ers agreed to go back up and check, yes both gates were closed. While they were gone we discussed what to do. Everything from camping somewhere and making the best of it, to going somewhere else and doing something else. We agreed to stay here, it was going on 5:PM. After giving us the wanted information the ATV’ers continued up Moose Cr. Rd. We decided to camp at a gate on Moose Cr. Rd, another 1 1/2/2.41k further on, where we knew there was a trail head for Trail 401, that also climbed up to the Sauerkraut Cr. Saddle, joining the road 1/2 mile/0.80k below the saddle, the saddle is the formal end of Trail 404. The ATV’ers where stopped by the gate on Moose Cr. Rd and turning back, stopped to visit as we were starting to set up camp. It was really windy and we parked the Tacoma to block some of the wind, put up tents, made dinner, cleaned up and put stuff away. At some time both David and Steve walked a short ways up the 401 trail. Mosquitoes were trying to group-up but the wind kept blowing them away, until about 7:30 or so when we were trying to relax and read. We ended up sitting in the pick-up and reading until 9:30 or so. Now the wind had died down some and the mosquitoes were gone, we brushed our teeth and went to bed. The wind intermittently gusted through the night, crinkling the tent. I got up at 1:AM to look at the stars -no moon. At times, earlier, it sounded like it was raining, but it hadn’t been, but did rain early in the morning -very lightly, big drops on the pick-up but nothing was really wet. I woke up to grouse drumming.

Weather wise it was perfect, in the 50’s/11c, cloudy and just a bit windy. Still in camp I asked Steve if his new car had an outside temperature reading, he wasn’t sure how to make it work, but he read the owner’s manual and figured it out and it was 44 degrees/7c in camp that morning. We got back to the road junction at 9:AM and David’s phone rang, we had a pocket of cell service there. I checked in with folks as he did his business and it was just a little after 9 when we skirted the blow down at the beginning of the road. We walked around the gate and shortly could see a length of the road with pile after pile of blow down as far as we could see. What looked like one continuous pile actually had spaces between them, except the second set which was so extensive we climbed up on the bank to get around it, the rest we could either just step over their “low end,” or bust out branches to go under. One we hand and knees crawled under. Then there were places where we could go 1/4 of a mile/0.40k or so between piles. The advantage to the blow down, especially on the lower side of the road was that it left gaps in the trees were we could get some decent views of the mountains north and east of Lincoln in the East Fork Of The North Fork Of The Blackfoot River, in the Scapegoat Wilderness. We tried to pick out Stonewall Mt. and Red Mt., Red Mt. being the highest in that area over there. On the way back down we had one view where we could see the east side of the Swan Range. The trees were predominately same age lodge pole pines, indicating past fires in the area. There weren’t many flowers. Some dandelions, the huckleberry, vaccinium, and twin honeysuckle bushes were blossoming.  Yellow violets were the most profuse, and arnica was up but not blossoming yet. Up high glacier lilies were everywhere. We saw no wild life except a gray squirrel and one or two small birds, and of course a few mosquitoes. Saw scat from grouse, both elk and moose, about a mile up, bear, from yesterday or earlier today. Never saw the bear. I thought I heard eagles and red tailed hawks, but never saw them. There was also some interesting rocks, Steve’s copy of the newest Road Side Geology of Montana, said this area, with red and green rocks was part of the Missoula Group of basement rocks, there were perfectly striped ones of fine sediments and green “shoreline clay -now rock” with the wave formed ripples on it. But the higher summits were granitic intrusions and there were veins of black rock that looked like part obsidian.

The first part of the road is on the north slope and the blow down was worse here than when we started to curve around to the west slope. Just as I was beginning to think that it was nice this road would be all down hill, on the way out, we got into a section where there were three or four stretches where the road dropped slightly before going back up again. Annoying!!!. Some where in here, now on the west slope we passed the 3 mile/4.83k point. At 3 1/2 miles/5.63k it looked like we were coming up on the 401 trail junction, in maybe 3/4 of a mile/1.21k. There was now considerable numbers of snowbanks on the road bank and all along small feeder streams, springs and seeps had been flowing over the road, sometimes with large puddles covering the entire road. Finally we saw the large FS road signs that marked the end of the 401 trail coming up. We had to walk over a wide snow melt surface run to get to a nice sitting log at the top of the trail to eat lunch. It was still another 1/2 mile/0.80k and over 100 ft/30.48m to the saddle from there. It was a little after noon, my GPS said we had gone 4.77 miles/7.68k and were at 6420 ft/1956.82m, it would be over 5 miles/8.05k to the saddle from the road junction. Once at the saddle, from when we hiked it last year, we had gone up 1 1/4 miles/2.01k from the saddle and the GPS had made it look like there was still close to 1/2 mile/0.80k to the summit from there. So figuring 1 1/2 miles/2.41k from the saddle, that left us with 4 miles/6.44k to go, to get back to here. Roughly a 13-14 mile/20.93-22.53k day. It was too early in the season for us to stress ourselves that much, so we decided to head back out, and just come back later in the summer when the road was open, and do our original plan of camping at the saddle. Steve had seen enough of the road to know he didn’t want to drive his car up it, but we knew the Tacoma could make it up. The trip back out was uneventful, except that this was when the mosquitoes were getting pesky. We were back to the vehicles around 3:30, my GPS said 9.44 miles/15.20k. Steve headed back home and David and I went into Lincoln to get dinner.

FYI my GPS showed that Trail 401, continued down into the Sauerkraut Cr. Valley from the Moose Cr. trail head also. 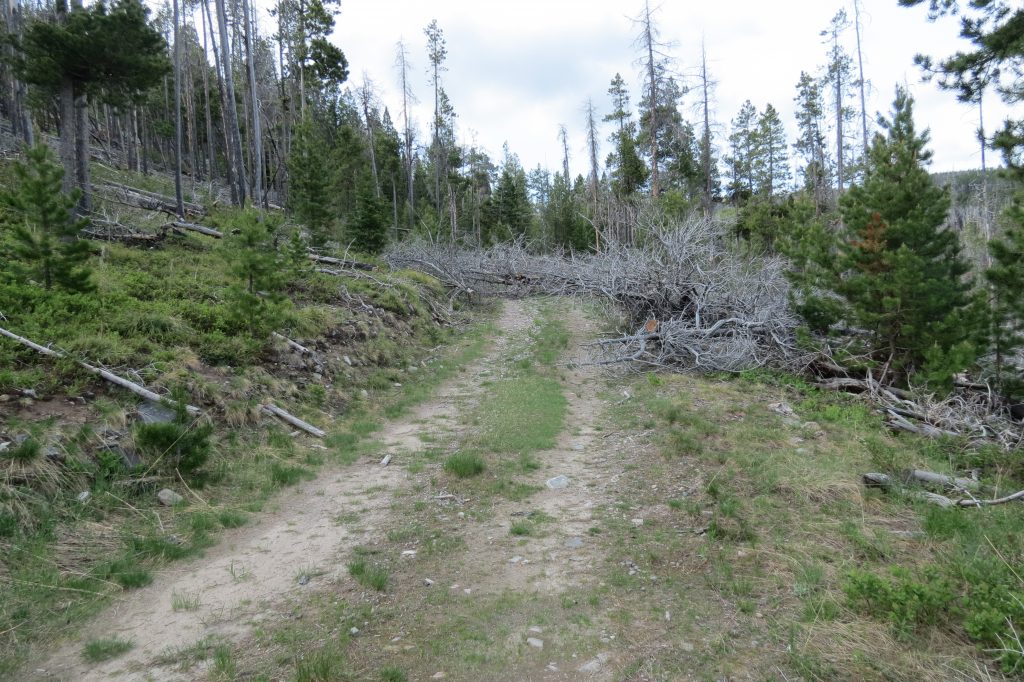 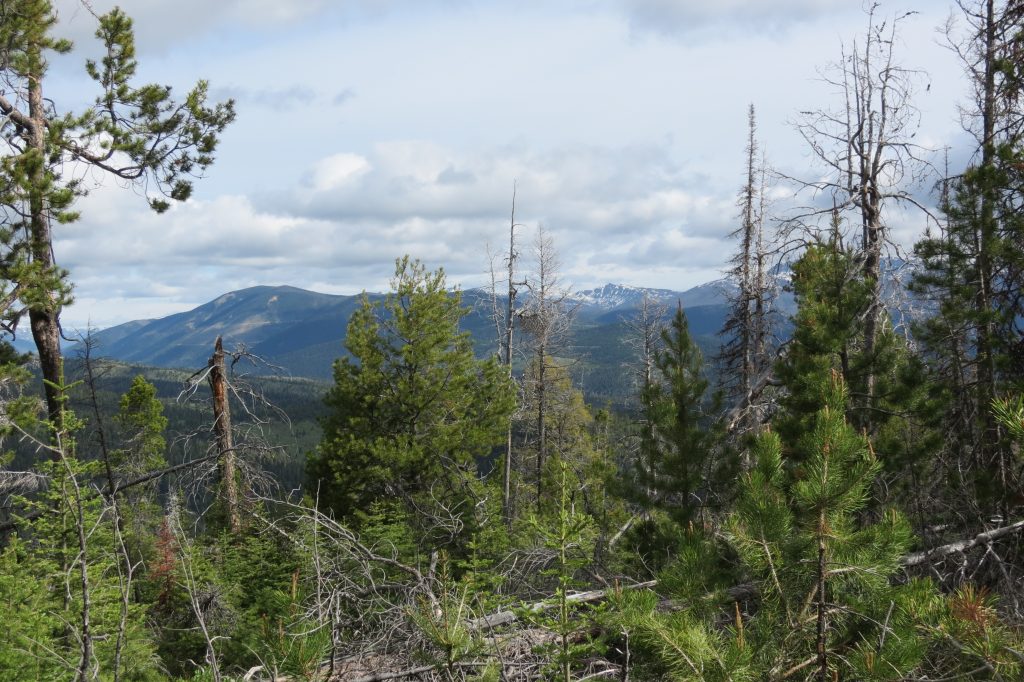 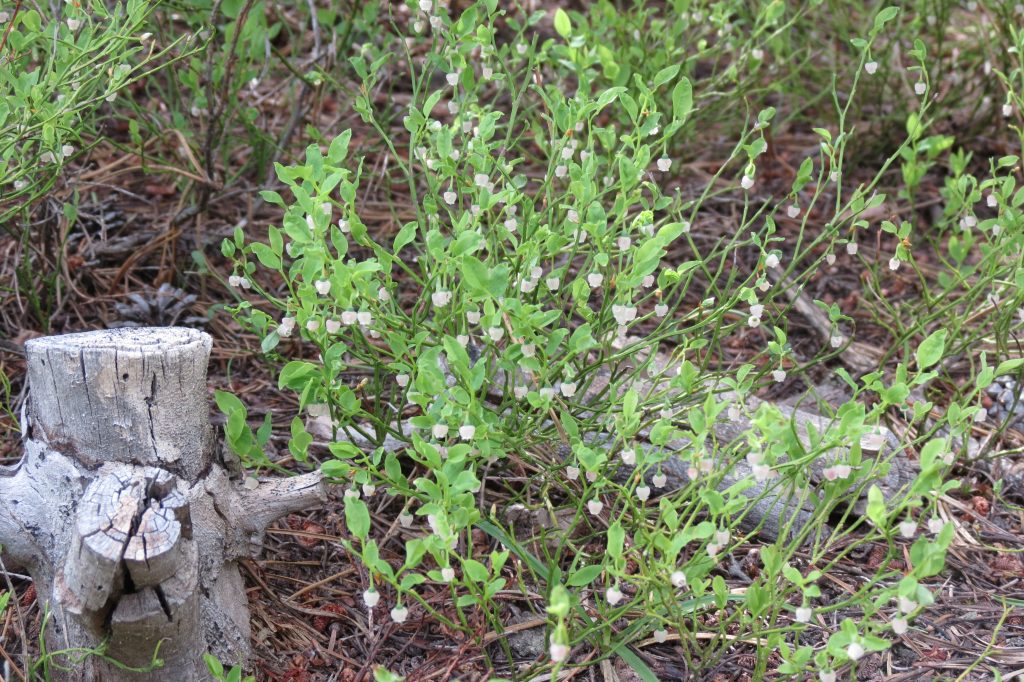 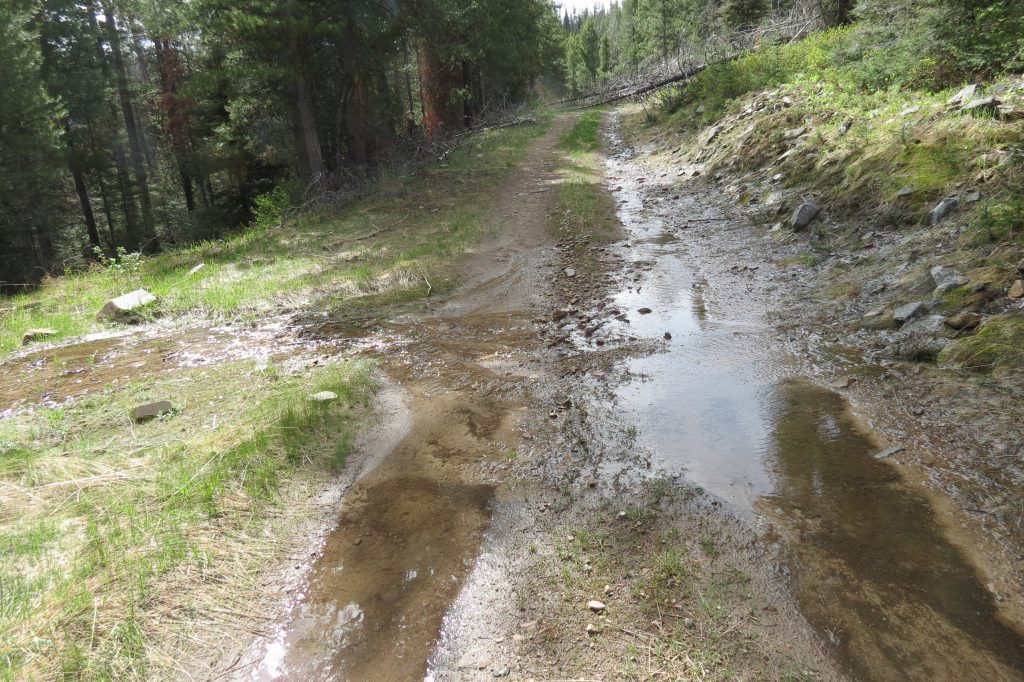