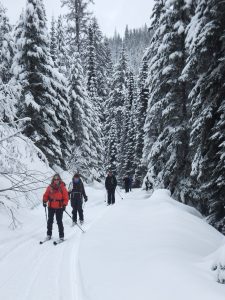 Four of us met in Missoula then the four from the Bitterroot, Renee, Jay, Judy and Paul met us in Lolo. At the Visitor’s center we unloaded from the two vehicles we had come up in and drivers took them down to the Crooked Fork Bridge, Steve brought drivers back up and then set out to snowshoe around some of the trails. Judy and Paul had worked at The Powell Ranger Station in the 1980’s, Paul was the one who found the body of the skier killed in an avalanche on Mt. Fuji in 1985. They all planned to go to Lochsa Lodge to visit their old stamping grounds, after the ski.

It was around 11:45 AM when we set out. The weather had called for 4-8 inches/ 10.16cm- 20.32cm of new snow overnight, but no wind today, temps in the mid 20’s/ 3.8c, cloudy now, to clearing later. The groomer was broken down. We found Pack Cr. Rd. to be both ungroomed and no fresh snowmobile tracks, with maybe 4 inches /10.16cm of new snow above. The ladies got out front early and made tracks. The snow conditions were great and we moved along quickly. The first 3 miles/ 4.83k though definitely down hill, aren’t steep and were just nice skiing. We missed our usual lunch spot at about 3 miles/ 4.83k, just before the serious down hill starts and we gathered, instead, in a curve to eat. Some snowmobiles came by going up around 1/2 way. Now we had their tracks to ski in, going down wasn’t terribly fast, and old snowmobile tracks sunken into the original grooming gave us a safe margin in the places where the road has a lot of exposure. As we went down the new snow got sparser and the tracks got a packed crunchy feel to them. Now we were seeing lots of old tracks from moose, and towards the bottom, fresh moose tracks. David saw some big kitty tracks. We were all back to Hwy 12 by 3:45, four hours to do 8.3 miles/12.9k, now under a bright blue sky. A great day of skiing. Julie Kahl 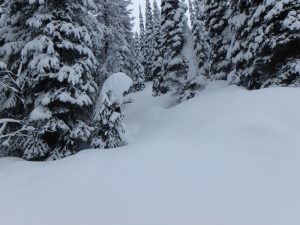 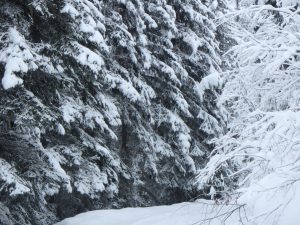 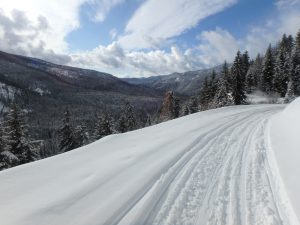