Another great day at the Spotted Dog Wildlife Management Area. Because it was suppose to rain in the morning, I told those interested to meet outside the Avon Cafe at noon. When no one showed, David and I continued on our own. We were last on the east side of the WMA in 2014, when David, Steve Schombel and I explored trailheads on both sides, in the rain. This was when I first got the idea to do the WMA as a point to point hike. After that we focused our attention on the west side where there is only a meters wide section to go from the west side to the east. After testing out that route and using it several times, it only seemed appropriate to climb the highest point in that area, which we did in 2018. While up there on a 6000 ft/ 1828.8m plus ridge -the divide between the Clark Fork and Spotted Dog drainages-  I took the time to scope out the upper end of Spotted Dog Cr. The bowl below us was relatively shallow, without the very deep channel cuts signature of the area. The further east I looked the deeper and steeper the creek cuts became. Navigating with my GPS had also given me a “signature” of the road system in the area of the west SD drainage. A low point of the ridge just to the north of the high point, at 6000 ft/ 1828.8m was “the pass” where we needed to cross over to be set up right to access the narrow connection between the two sides.

On the ground a lot had changed in six years, in 2014 the east road -Spotted Dog Cr. Rd, had been a nice road compared to the somewhat eroded one on the west (O’Neill Cr. Rd), now it was a nice road for the 1/2 mile/ 0.80k that it is Trout Cr. Rd., that crosses the Little Blackfoot River just opposite of where Hwy 141 comes into Hwy 12 from the north, just west of Avon. At  about the 1/2 mile/ 0.80k point Trout Cr. Rd becomes a private drive and Spotted Dog Cr. Rd. turns to the right and follows the divide between the Spotted Dog and Trout Cr. drainages. Not quite as bad as a two track, it was badly rutted mud, wet and dry, making a high clearance vehicle almost imperative. After 4-5 miles/ 6.44 – 8.05k of that we finally got to where FS  Rd. 314 comes in from the east, from Elliston. This part of the traveling was slow as I used GPS points from 2014 to pick the correct route at road junctions, most of which now only had one still clearly used road. At the FS Rd 314 junction the road improved considerably, but only for a short distance until we came to a confusing spot where the road, with a road junction, runs on top of the section line between FS land and the WMA, but both the roads have FS numbers. In 2014 I had forgotten to get a waypoint where it was we had actually stopped, now out of waypoints we stopped to consult an old Helena Forest map (2006), and talked briefly with a guy and little kid on an ATV. The map showed one of the roads as going down into the WMA to cross the main stem of the Spotted Dog Cr. just below us, then continuing up the opposite slope. Crossing the creek the road was obviously less used, had standing water and a short way up the slope a cattle guard and gate. The gate was part way open so we went up, opened the gate further, then left it as we found it, and continued up around mud puddles on the north aspect of the slope and found a parking area by a locked gate, at 5600ft/ 1706.88m. It was very windy, and up a slope above the parking lot was a large rock with a large ponderosa growing out of it, and some shade. We decided to go up there to eat lunch. The tree didn’t give us much wind break and its shaded side was covered in old elk droppings. We went a little further and sat by some low rocks to eat, then walked a little further along the slope to get a view down into the basin to the west below us. Using the towers of the electronics site on Rocky Point, on the northwest end of the WMA we scoped things out and knew that the ridge of the basin opposite us was the 6000 ft/ 1828.8m pass we needed. The traces of old roads were visible all over the basin. The Middle Fork and the South Fork it emptied into, were just below us. This was the shallow basin I had seen from the high point. The question we needed to answer now was if it would be easier to take a shorter route and drop down, cross two creeks and their draws, and climb up the opposite side, or put in more miles/km’s on the old roads and cross the drainages higher up. We went back to the truck, this was terrain David still had to be careful not to fall in, going cross country today was out. Across from the parking lot we could see a road track, that seemed to come off the gated road, so we opted to go over and check that out.

About 1/2 mile/ 0.80k down the road we came to a culvert crossing of the Middle Fork, the road we saw on the face, but it had not been used in a while and tracing it down on the GPS it just went around the slope and dropped down into the lower drainage. The GPS showed another road junction 1/2 mile/ 0.80k on and we went that way, along the creek bottom and shortly scared up a young moose that obligingly posed for photos. The next junction, now a mile/ 1.61k, down the gated road had an obviously a still used road that went up the opposite bank, but all the other roads that the GPS showed coming in no longer existed. We followed the road around and up the slope, now at 5800 ft/ 1767.84m, we encountered the moose again which moved off into the trees above us. The GPS showed another road junction about 1/2 mile/ 0.80k ahead, and we found ourselves walking though a long grassy slope, strangely the higher up we got the less windy it was. Across the Middle Fork below us we could see the rock and the ponderosa and our truck. Across the grassy slope, back into some trees, we not only found this road junction also no longer existed, except for some traces in the landscape, the GPS showed the main road no longer continuing, but as we moved along the very real “non-existent” road, we went off any roads on the GPS across a slope. This same thing had happened when we climbed the high point in 2018. We followed it down and around a side drainage of the South Fork and when we came out of the trees again we had a great view across the drainage to the pass. We could see that the road we were on continued up and along the slope, probably to meet up with another road system -one that I recognized, on the GPS, from the high point hike. The answer to our question seemed to be, to take the high road route. We had come just shy of 2 miles/ 3.22k, I estimated there was still at least two miles/ 3.22k to the pass from there, but the route was obvious from this point. Part of the charm of this area is that distances are hard to judge. It was 4:PM and we turned back, no moose, there were a few clouds around the peaks of the Flint Cr. Range we could just barely see above the ridges to the west, otherwise it was a perfect blue sky day, with a crisp 3/4 moon hanging in the sky. We left the parking lot by 5, back to Hwy 12 by 6, having dinner in Drummond by 6:30.

Other than a variety of small birds and some ravens, we saw no wildlife other than the moose, not even deer, but lots of elk sign. And the remains of a small predator, perhaps a coyote or, because the fur was very white, a lynx. Wildflowers were a different story, they started with pink flowers we didn’t recognize -later identified as field milkweed – just up the slope from Trout Cr. Rd., in other places along the ridge part of the road we saw -on windy dry slopes- blue camas (and none in the creek bottoms where we would expect to see them). The lunch slope had two types of phlox a taller large flowered variety, pink and white, and a tiny-white-flowered cushion type. There were only a few scattered arrow leaf balsam root, arnica and lupine. Sticky geranium and bear grass was up but not blossoming yet. Others: bluebells, American bistort, white camas, larkspur, fleabane daisy, shooting stars, parsleys, and sugar bowl/vase flowers. What we didn’t see was wild rose, bitterroots or the wild blue iris or wild white iris that we saw on the west side. The only people we saw the entire day was the two at the FS road junction. Lots of nice, open, empty back country here. 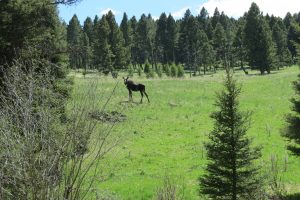 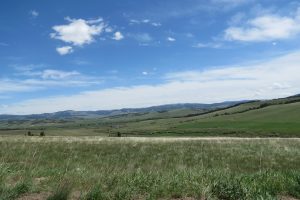 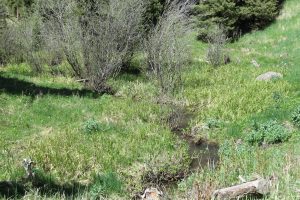 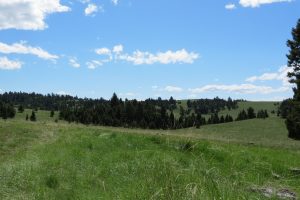