If one could order a perfect October day to hike in an open area, this would have been one. Blue sky, light wind, snow capped mountains in the distance. We had a little bit of apprehension on the days leading up to this trip, rain or a low snow line would have made the west side’s O’Neill Cr. road impassable in some of its steep muddy sections. But days had been dry enough so we could use this entrance into the Wildlife Management Area. Lois Crepeau and Dave Robertson met Julie and David Kahl at the Comfort Suites on East Broadway, we went in Lois’ Tacoma and I drove. Fall colors were everywhere as we drove down Hwy I-90 to the Beckhill Rd. exit, and up into the hills to the east. We only saw one other vehicle on the way in. The “parking lot” is at 5400ft /1645.92 m and we were aiming for some 6200 ft/1889.76 m summits to the southeast, but weren’t sure exactly which of the hills above they were. A previous trip had pinned down exactly how to get to the narrow strip of land that was the only place to pass between the west and east sections of the WMA, and we headed that way. From that trip we knew not to cross over the hill just above the parking area, as it would just drop us down into a gully behind it. We side-hilled the hill to the gully behind, a draw off of Helena Gulch just to the south. Cross that gully and climb a slight hill to a second gully and a fence line to private property. Lois found a “no trespassing” sign, blown off the fence and set it against a fence post, where we started to follow the fence line down to the joining-section “corner.” The fence line drops down into the main stream of Helena Gulch. Right where the fence crosses, a pool had been formed that had water on both sides of the fence, we had to go a hundred feet or so down the runnel to cross it. Then just up the other side is a two fence line corner with a gate that opens into a rutted two track the GPS’s said was Jake Cr. Rd.

We had lunch at the corner -a short mile/ 1.61 k from the parking area. This time of year there were no wildflowers but we could identify the gone to seed version of some familiar ones. But mostly the dominate species was grasses, it was too dry for knapweed or sage brush, but in the right aspects or places that may hold a little more water we saw stunted rose bushes and knapweed. There was no sage brush but some stunted rabbit brush, and a bush that we didn’t know what it was. Pine trees grew in the north and east aspects of the deep gullies, and the wetter parts of the gulches had aspen trees. David explored a stand in Helena Gulch and scared up a mule deer that ran up the gully side, and boing-boinged across the open hills out of sight by the parking area. Other than grasshoppers it was the only wildlife we saw. There were old to very old elk dropping everywhere, and excavating critters had thrown up a lot of fresh piles and dug holes, but we never saw any of them. Some of the holes were good sized and we wondered about badgers and stuff.

Through the gate you cross the two track Jake Cr. Road and a short ways up a fence around an old cattle station, its corral over grown with some pretty good sized trees, was an open gate into the east section. Next to the corral was a wet area where in the spring we had seen white wild iris (the blue is much more common). A trail/road from there goes uphill slightly to a very useful land mark of a pipeline ID pole, very close to where we had turned around on the previous trip and I had done a way-point on my GPS. David and I worked with our GPS to try and figure out which of the points above us were the 6200 footers. They seemed to be to the southeast, so we side-hilled around to cross a wide draw to a fence line, crossed the fence at a spot were it was starting to fall down. There we did more GPS work and realized that the 6200 footers were across a major gully of now Freezeout Cr. a mile away yet. Now, a mile from the lunch corner, we decided to climb the 6000 ft/1828.8 m point above us, Lois, Dave and David left their packs there and it didn’t take us long to top out on a rocky flat spot, to improved views. The Flint Cr. Range and the Anaconda-Pinlars with Mt. Hagan were just across the basin, through a gap in the Flint Cr. Range we could bearly see some snow covered points -either the John Long or Sapphire Mts. To the south we could see all the way down to Fleecer Mt. and the south rim of the Clark Fork basin. To the east were the higher points (7000ft/ 2133.6m) in the east side of the WMA and beyond that some of the higher peaks of the Divide Range around the Blackfoot Meadows area by Elliston. Some with snow on them. To the north was the edge of the Garnet Range. We perused maps to try and figure out which mountains we could see to the northwest through a gap in the Garnets, eventually deciding they were the backside of the Swan Range over by Ovando. We also noticed that we were almost directly south of Lincoln, up on Hwy 200 on the other side of the Garnets, with the peaks of the Scapegoat Wilderness Area north of it. And the question of the day became, was the Scapegoat area part of the Swan Range or not? After all it is the East Fork, Of The North Fork, of the Blackfoot River back in there. We ended our stay trying to take a group picture, first with our back to the Flint Cr. Range, but then our faces were in shadow so we moved to the rolling hills of the north side, which showed what a beautiful day it was. Lois had found an easier way down the north side of the point into the gully, here we saw left over bits of graupel tucked down in some of the old critter holes. On the way back out to our pipeline landmark I was watching the Freezeout Cr. Gully to the south to see if there would be a good place to cross it, major gullies in here can be hundreds (30.48m) of feet deep. Now that we knew were the high points were, there would be a future trip to come back and climb them before shifting focus to the east side of the refuge. When we got back to the spot were Lois had left the sign leaning against the fence post we started cross country back to the parking area in the hills above us. We actually went too far to the north and ended up coming back over the hill we didn’t need to climb in the beginning. No one complained. David drove us back out and we went to the Broken Arrow in Deer Lodge for beer before driving back to Missoula. 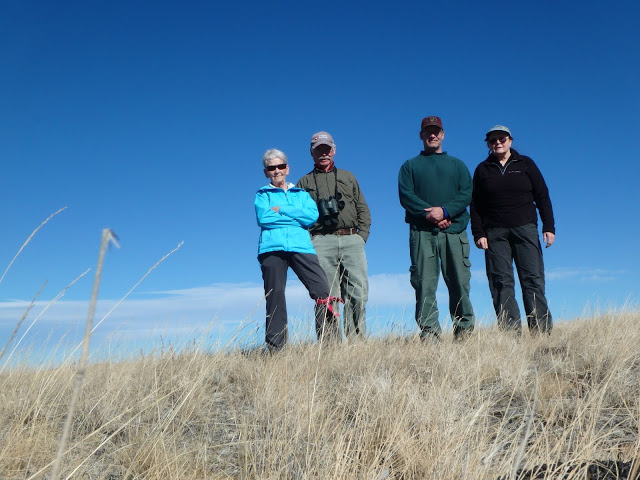 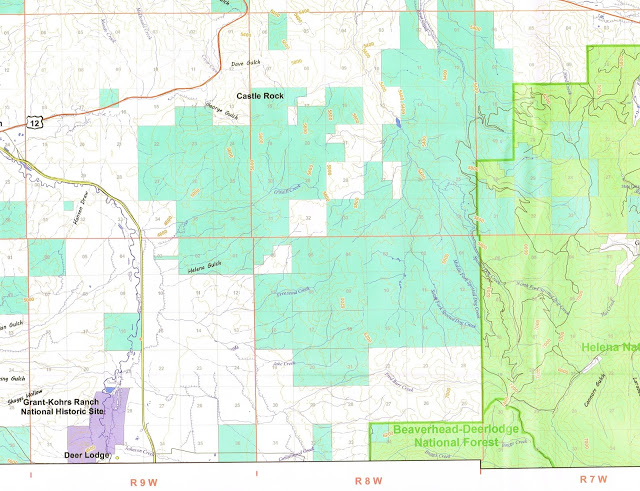