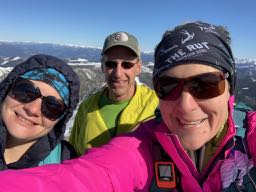 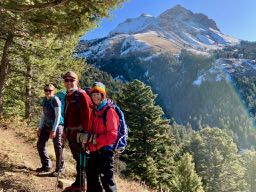 Date: October 12, 2019
Trip Leader: Laurel Vielle
Attendees: Anne Dellwo, Bryan Kercher, Britt and Sussie Lindsey and Dev the Wonder Dog
Stats: 16 miles RT with 5600 ft of elevation gain
With the winter weather event that took place a few days before, I was seriously doubting we would be climbing anything this past Saturday the 12th of October. But, as it turned out, we had bluebird conditions and relatively little snow to deal with.  Five of us (plus Anne’s dog Dev) started up the trail around 8:30am and in no time made it up to the saddle between The Helmet and the Sphinx in the Madison range.  After taking a quick break we all headed over to the area that would give us access to The Hemet’s western ridge.  I had never climbed The Helmet but knew someone who did and who had referenced a “keyhole” access to the ridge.  Sure enough, after hiking below the huge sheer southern face of The Helmet, we found a narrow gully with a chock stone and squeezed through the “keyhole” the stone made.  There was more snow on the western face but we still made it to the summit in no time.  After descending, three of us decided to make an attempt on the Sphinx.  The Sphinx had much more snow than The Helmet but luckily for us, someone had broken trail earlier that day and we basically followed their tracks to just below the summit.  At that point, we decided to head straight up to the summit ridge and that was the area that had especially deep snow, heading up the last couple hundred feet.  Of course we had dropped our snowshoes at the saddle so had to plow through the in places knee deep snow. Thankfully that didn’t last long too long and while we hit the ridge to the west of the summit, it was an easy walk along the wind-blown ridge rock to the high point.  We had a quick bite to eat, snapped a few pics and got out there – it was cold!  The climb down the Sphinx wasn’t bad and then we had an easy hike back to the trailhead. We got out about 5:00pm.  A successful day for all. 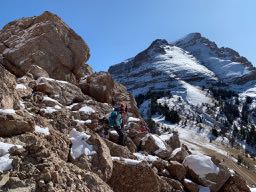 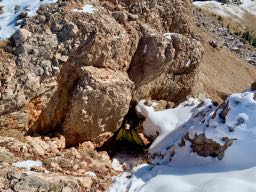 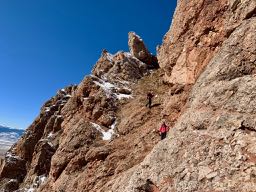 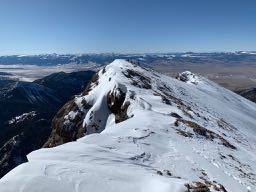 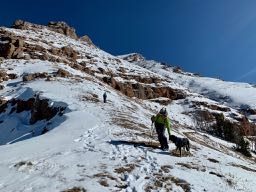