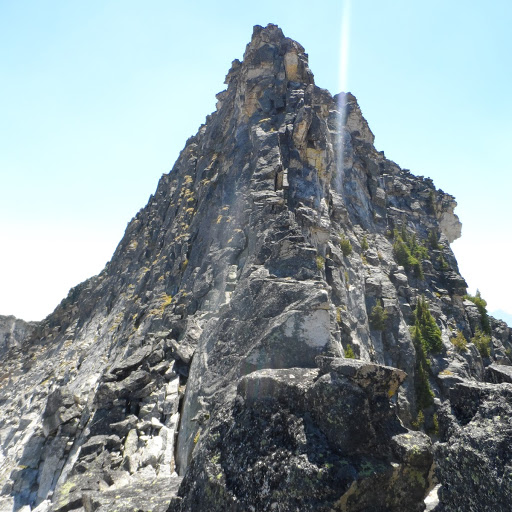 Trip Leader: Forest Dean
This trip had originally been scheduled to take place on the second weekend in June.  However, rain (remember what that is?) interfered with those plans and I postponed it.  On Friday, the 21st, I had the sudden realization that I could get out for the day on Saturday.  I contacted those who had expressed interest and/or were planning to go back in June.  Unfortunately none of them were available on short notice.  Thus, I became a party of one.  I actually wouldn’t at that point even really have called this a “Club” trip; however, this is a very rarely climbed peak and I thought it may be of interest to others- thus, I am posting here.
I began hiking up the Chaffin Creek trail at 7:45am.  Relatively uneventful hike up to the three beautiful lakes (Hart, Tamarack, Chaffin).  Between Tamarack and Chaffin Lakes I crossed the stream and began ascending a wide boulder covered ramp south of Chaffin Lake.  Basically I was taking as direct of a line as possible towards The Tusk (Point 9486’ on the maps).  The ramp led to a traverse around the north side of The Tusk and I arrived at the low spot on the West Ridge of the peak at 11:15am.  The very minimal amount of beta I had on this Peak was the West Ridge was a low 5th climb of about 200’ to the summit.
I had packed along rock shoes and a short rope.  Installed the shoes on my feet and started up the ridge.  Exposure became great almost immediately and not having done much rock climbing this year, I lost all of my confidence.  The technical commitment isn’t great and it isn’t long, but it’s quite exposed.  I turned back and decided to traverse across the base of the spire to see what the East Ridge looked like.  This only took a few minutes.  Searching around on the East Ridge I again was scared off.  The exposure is a bit less, but the technical climbing is a bit more.  Either route would be easy with a belay partner.  With hope waning, I decided to look at one more option.  On my way across the base of the North Face from the West to the East Ridge, I had noticed a ledge cutting diagonally up the Face.  I traversed back about halfway across the face and located the ledge again.  The solid 4th class ledge angles up to the left (east) for a bit, then was able to zig and zag on similar ledges as I worked upwards.  About 40 feet below the top I met the crux.  A short 8 foot section of low 5th class rock blocked the way.  I could see that once past this obstacle I was home free.  So I carefully protected the moves with my rope and climbed up.  Beyond was about 40 more vertical feet of 4th class and then I was there.  Time was 1:30pm.  Had some lunch, took some pics and prepared for descent.  No sign of anyone having been here, but I know of at least two others who have (both solo climbers as well).
Downclimbed back to the crux section and then did a 30 meter rappel.  Beyond that I had another 40-50 feet of careful downclimbing and then I was back in the boulder field at bottom of the face.  Decided to hike out through the incredibly scenic upper Chaffin lakes.  Saw several folks on my way down to, and then camped at, Tamarack Lake.  The hike out took forever (as all Bitterroot canyon hiking seems to!).  Arrived back at trailhead at 6:00 pm.
This is certainly one of the most challenging summits in the Bitterroots.  No easy class 3 route up this thing.  The south face would really provide some outstanding multi-pitch routes.  Of the standard routes on the 9000’+ Peaks in the Bitterroots, only Canyon Peak and West Trapper may be harder. 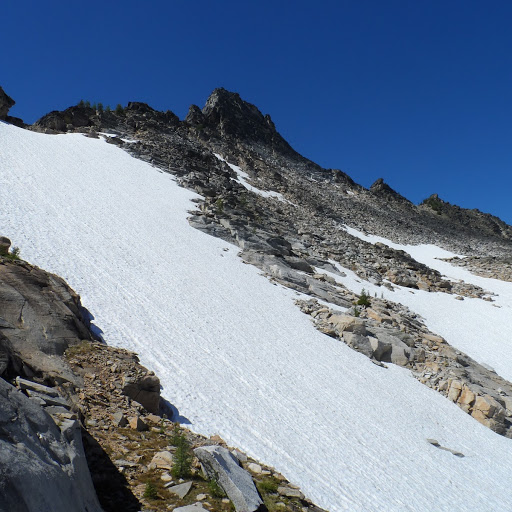 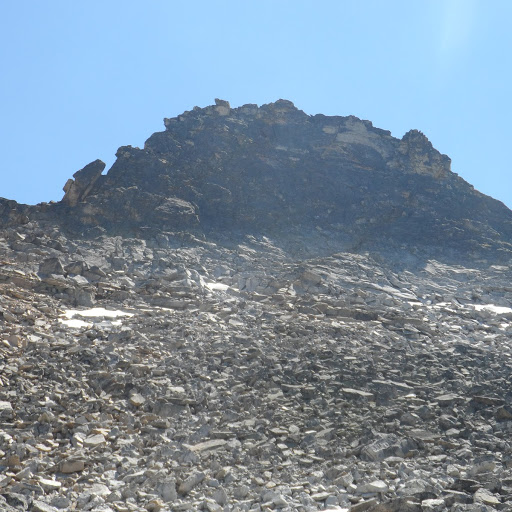 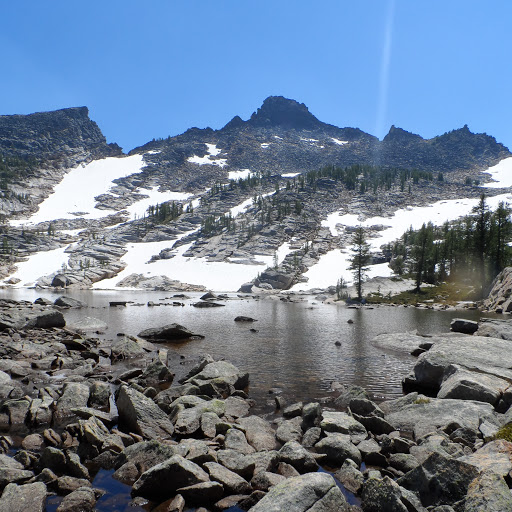