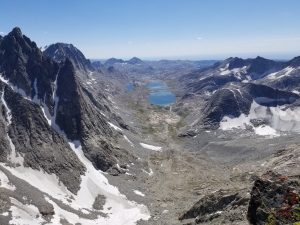 I have always raved about the Winds. Personally I don’t believe there is a more idyllic mountain range in the lower 48. The combination of huge granite peaks, glaciers, alpine lakes, streams rivals anything the high Sierra might be able to offer- but without the hordes of people (although Titcomb Basin on Labor Day weekend may be an exception). 13,000’ summits are everywhere. Many of the lakes are teaming with trout. Many CDT hikers say the Winds are their favorite section of the entire 3000 mile adventure. Its paradise!

Last winter I discussed putting this trip together with Brent. He had heard me fondly talking about it for several years now and was eager to get there himself. We listed it on the calendar, and when the end of August rolled around there was a total of 6 of us ready for the adventure. We had chosen Titcomb Basin as a place to basecamp for the week and attempt some of the numerous climbs and scrambles on the mountains ringing the basin. Titcomb is the most popular overall destination in the Winds (the Cirque of the Towers, in the southern part of the range would be the most popular climbing area); this huge basin contains the large Titcomb Lakes, numerous smaller lakes, has majestic 13,000’ peaks guarding all sides, and is all above treeline (10,500’ roughly). And although a popular destination, the many many rocky outcrops within the basin make for easy ways to hide yourself from other adventurers and find your own private spot.

Mick was the first to arrive at the Elkhart Park trailhead on Friday morning. She had decided to do a two day approach hike to cover the 14 miles into the basin. Since we were staying a week, and planned on lots of climbing, we all had enormous packs (70 to 90 pounds). Josh and I arrived on Saturday morning and did the long, brutal, but very scenic hike in one push (about 8 hours). Brent and Abby did the same but came in on Sunday. Rob, delayed by a work commitment, arrived at the trailhead on Sunday afternoon and, like Mick, took two days to approach arriving on Monday afternoon. We camped at a small lake about a half mile south of Lower Titcomb Lake.

The week (Sunday through Friday) was occupied by various climbs, attempts to catch fish, hikes, relaxation and eating! Weather was nearly perfect every day (except some showers on Friday). I won’t go into detail on all of what we did but rather, briefly recap our week here:

Sunday- I got a mid-morning start and took off (solo) up to Bonney Pass. From there I did easy scrambles to the summits of the 13,000’ peaks on both the east and west sides of the pass: Dinwoody Peak and Miriam Peak. Views were incredible from both summits. Miriam’s summit is actually very small and requires a short 4th class bit of climbing to reach it. Josh and Mick hit the trail late that morning (11:00) and headed for the odd-shaped peak called Elephant Head on the south side of Indian Basin. Here they enjoyed a 5 pitch climb up its northwest ridge (5.5). They arrived back really late. Brant and Abby arrived around 6pm.

Monday- Nobody up too early today. Brent and Abby took a hike up Titcomb Basin to the base of the climb up to Bonney Pass. Mick, Josh and I got a late start and hiked up into Indian Basin and to the base of Ellingwood Peak to get a good look and recon on its classic 10 pitch North Arête (5.6). We were planning on doing this Tuesday. Rob arrived at camp mid-afternoon. Josh and I did some fishing but very little luck. That evening, Josh and Mick decided to get a real early start and try Ellingwood. I had planned on going, but Rob was exhausted from his hike in, and Brent didn’t want to abandon Abby for what would likely be a 20+ hour day.

Tuesday- Josh and Mick were up early and gone when I hit the trail to go solo Mt. Helen. Another hike up Titcomb Basin brought me to the bottom of the long, steep snow gully on the north side of Mt. Helen. I kicked steps all the way up this to about 13,000’ and a ridge on the north side of the peak. It took some routefinding to get myself up the narrow ridge to the 13,620’ summit. Very fun third and fourth class route. Meanwhile, Abby and Brent were scrambling up the second highest peak in the range- 13,745’ Fremont Peak. Rob was actually not far behind them- they passed him on their way down. He summited a little later. Unfortunately, Josh and Mick didn’t have quite as fun of a day. When they neared the start of their climb that morning, they were forced to witness a helicopter rescue operation taking place on the summit of Ellingwood Peak (still unsure of what transpired, but Josh and I did hike in on Saturday leapfrogging two females who were planning to climb it the following day.) By the time the rescue operation was finished it was 8am and really too late to start such a big climb. We all congregated again at camp that night, shared stories, and made plans for Wednesday.

Wednesday- Mick, Josh, Rob and I intended to make a go of Ellingwood again today, but I had second thoughts in the wee hours of the morning. Mick was the only one of us confident enough to give it a go, but the rest of us chickened out. We went back to bed and slept till mid morning. At that point we were all restless and wanting to do something, so the four of us settled on another couple of 13’ers at the head of the Basin. Abby and Brent headed up the ridge on the west side of the Basin and climbed an unnamed 12,000’ peak. The rest of us hiked up to the basin and gained the Sphinx Glacier. Rob and I gave the narrow West Couloir Route (snow/ice/low 5th class rock) of Mt. Woodrow Wilson(13,502’) a try but started to run out of daylight, so at 6:45pm, 130’ short of the summit, we began descending. Josh and Mick successfully simul-climbed the steep 4th class (low 5th) NW Ridge of The Sphinx (13,258’) arriving at summit at 6pm. On the descent, Mick took a 30’ fall but was very very fortunately stopped by Josh. Nevertheless, she was pretty scraped up and the descent became slow and tedious. Rob and I waited at the base of The Sphinx using our headlamps to light up the face they were descending. A long march back to camp under a beautiful starry sky. Finally arrived around 1:30am.

Thursday- Another morning of sleeping in! Not a lot of ambition today. Brent and Abby packed up and began hike out (they took it leisurely and spend two days hiking out). Mick also started the slow trek out. Josh took his fly rod and headed over the ridge to our west and over the Lower Jean Lake where we had heard good things about the fishing (he was skunked). I hiked up into Indian Basin with my spinning rod and had the same luck (however, later in the afternoon, I hooked a couple nice golden’s near camp and had a very tasty dinner!) Rob relaxed!

Friday- Our one rainy day. Wasn’t an all-day rain though, so we were able to sneak in a little adventure. Josh headed up Fremont Peak and made the summit in a whiteout. Rob and I tried to scramble up 13,517’ Jackson Peak, but decided to turn back at 12,800’ as the storm moved in. We arrived back at camp about 3:30 just before it really started to come down (we rested in our respective tents for 2 ½ hours as the rain came down hard and winds blew). The evening cleared and we ate as much of our remaining food as we could!

Saturday- The three of us all departed Titcomb at various times (7:00, 8:30 and 9:00). The hike out was fairly uneventful and the lighter packs felt much better. There were a lot fewer vehicles in the parking lot than a week ago. Josh and I promptly headed for Jackson and bee-lined it to the Snake River Brewing Company. There we met Kelsey Wellington and not only had a beer with her, but also connived her into letting us crash on her apartment floor! (Kelsey had just returned from a climb of Wolf’s Head in the Cirque!). Rob made it to Jackson around 8:30 and joined us. Fun way to wrap up an incredible week in the Winds!

If interested, my pictures can be viewed at: https://photos.app.goo.gl/W41EApP1fQ1UigNP6