Despite the weather this turned out to be a delightful hike. It had rained a bit in the morning, but as we met at the Wal-Mart parking lot the sun was trying to come out, there was blue sky at Lolo, and only a few miles up Lolo Creek the road was dry. There was still some clouds and moisture lingering over the higher peaks all day, but our trip was dry. The best and worse parts of the trip happened as we found the public access point, just to the east of Woodman School. There were some cow elk bedded down at the tree edge of the field, as we parked and got ready to hike they came out into the field and milled around like they wanted to cross the highway, but there was a car stopped, watching them, instead they started single file towards the school, then started running – it’s not good for cow elk to be running this time of year. As we walked the roads above them we never saw them again.This Weyerhaeuser road was nice to hike on for two reasons – well three, it wasn’t ripped. It rose continuously so you gained elevation quickly and it had a lot of “outer turns” with good panoramic views up and down the valley. Including the ridges around Lolo Peak across the valley, with its new coat of white stripes from last summers burn. There was still a lot, over there, that wasn’t burned, or burned only lightly. Along our road, there also were a few picturesque snags with scenic backdrops. This cold weather seemed to have the wildflowers stymied, we saw buttercups in the lower areas, some yellow bells (Fritillary) and just barely blooming pasque flowers. Very few of them. What we saw a lot of, all over the hill sides was those mesh sleeves that tree seedings had been planted in after the 2013 fire. The guys climbed the banks too look at them and saw a ponderosa, and probably Douglas fur. As we ate lunch, they found ticks all over themselves. We went a short ways further and then at a road junction got out maps and GPS to see if we could figure on the maps which road to take. We figured we were just on the west edge of Anderson Gulch. This was a place that was familiar to me, as I used to live in the house across the highway from the big metal roping arena, and used to climb the hill behind the house all the time, to top out on a rocky point that, now, was just below us. I knew that the road that went east met up with roads coming up from the gate by the Mill Creek Subdivision Bridge. So we continued west and stopped on an outside curve close to above where we were parked, having gone 2 1/2 miles (4.02 k), all of it up hill. There, with a gain of a little less than 1000 feet (304.8 m), we could see expansively to the west for the first time and discussed if the distant snowy mountains were those close to the Idaho side of Lolo Pass: Rocky Point, Rhodes Peak, Granite Peak, White Mt. It was our turn around time and it was precipitating a little up there. It only took us about an hour to get back to the cars. The going was easy, the views spectacular with good company – a great day. 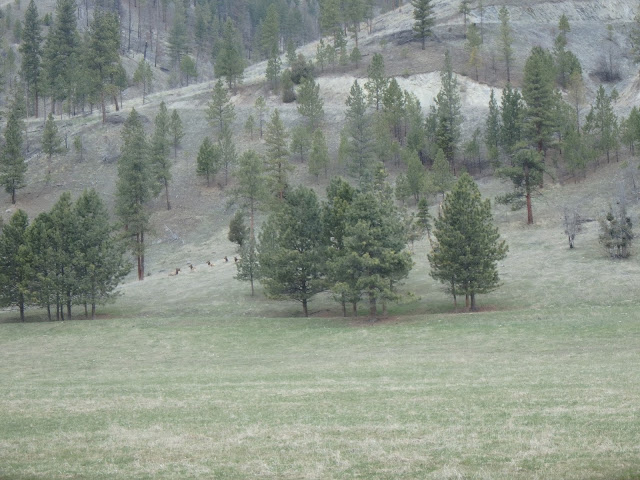 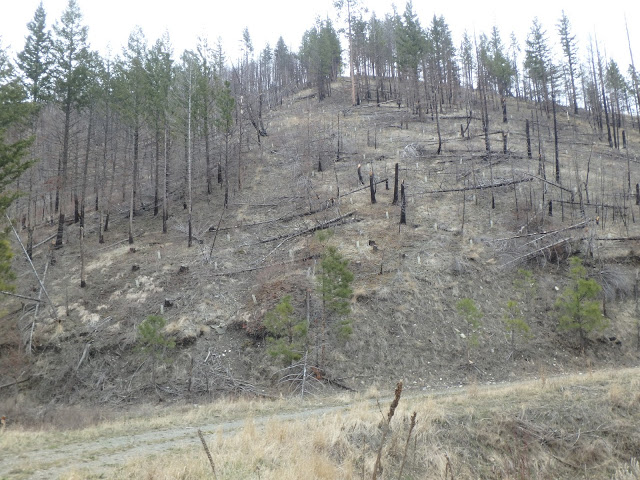 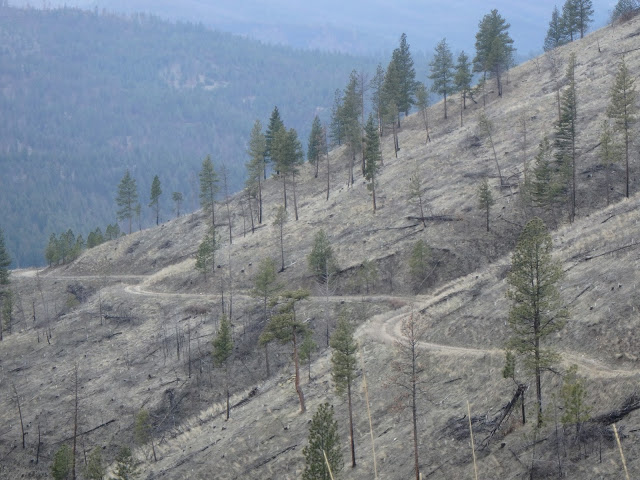