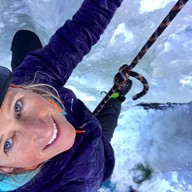 Elizabeth grew up in Northern Maine and thanks to her parents, she had lots of adventures as a kid. She received a B.A. in Communication from the University of Southern Maine, and a year later she set out on a road trip which was slated to last a month, but turned into a life-changing adventure that landed her in Missoula.  She’s a photographer and filmmaker.  She enjoys all sorts of mountain sports including climbing, ice climbing, hiking, running, mountain biking, backpacking, fly fishing, and skiing.  She draws from her twenty plus years of experience as an adventure racer and loves being in the high country and ridge lines most of all.  She is mother of two spirited daughters who are often also her partners in adventure.

Hello, I am Casey Lammers. I am a native Montanan.  I grew up on a large ranch in central Montana.  I spent my childhood  running around the prairies and foothills of the rocky mountain front. I had always dreamed of big adventures high in the peaks to the west. My dreams came true in 2014 when I moved to the Mission Valley. I quickly started exploring the wonders of the Mission Mountain wilderness. With my adventures becoming bigger and bigger.  I joined The Rocky Mountaineers in the spring of 2019 and quickly found a family of mountain adventurers.

I am honored to be a part of the close camaraderie we all share in The Rocky Mountaineers. I feel privileged to be considered for a leadership role in this fine group and look forward to helping maintain and grow our memberships and activities. 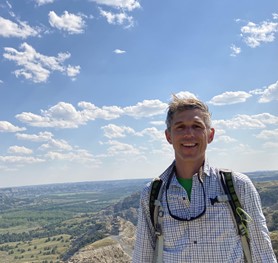 Chris hails from New Jersey where he grew up exploring the neighborhood woods and climbing trees. After studying environmental science in Rochester, NY, he spent three years in El Salvador as a Peace Corps volunteer before transitioning into a career at the US Forest Service International Programs office. These experiences cultivated curiosity in the outside world, an eagerness to explore, and a thirst for crossing borders. Once fully caffeinated, Chris enjoys running and riding trails, rock climbing, spreadsheets, skiing/falling, misidentifying birds, and in general, going uphill.

Greetings. I’m Tom Statz. When I moved to Missoula I joined The Rocky Mountaineers looking for friendly, welcoming people who enjoy the outdoors as much as I do.  TRM exceeded my expectations.

I grew up with the ‘adventure’ bug but didn’t know it until later in life.  I discovered organized adventure when I was an undergrad at the University of Wisconsin, Madison.  I joined the student outdoor club, The Hoofers, and quickly became an active member.  First going on then leading trips.  In San Diego I was a Leader in both California Camping and Hiking and Take a Hike Meetup groups.  In those groups I led multiple long backpacking and canoeing trips along with numerous day trips.

I’m impressed with The Rocky Mountaineers and their commitment to the group members,  the community as a whole, and the environment.  I would like to help The Rocky Mountaineers to grow, serve its members old and new and continue to respect the outdoors we are so privileged to have here in Missoula.  I also look forward to adding some adventures to the TRM calendar. 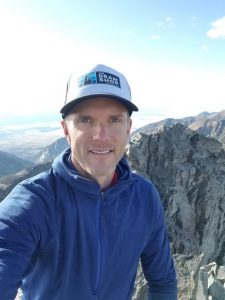 I moved to Missoula from Wisconsin in 2001.  The mountains lured me.  In 2004 I joined TRM hoping to find some like-minded folks that could teach me a thing or two about climbing mountains.  I joined a few trips and was hooked.  More importantly, I met some people who really showed me the ropes of all thing’s mountain-craft.  These folks became mentors and friends- you know who you are, and I appreciate all the great times we have had and continue to have in the high country!

My primary passion is alpine climbing, but since this involves so many disciplines I (by default) also really enjoy ice climbing, rock climbing, skiing, hiking, running, backpacking and yes, repeatedly hiking up and down Mt. Sentinel.  I have been extremely fortunate to have my son as my companion on many mountain trips from the time he was 5.  I enjoy a good craft beer (or six) after a day on the go while dreaming about more adventures to come with fellow climbers!  To facilitate all these adventures, I try to make a buck selling commercial turf maintenance and irrigation equipment. 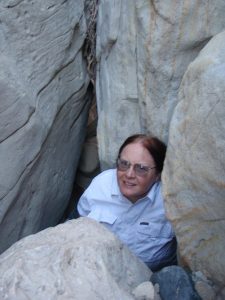 I was born and raised in Milwaukee, WI, and was an “outdoors person” from an early age, including Girl Scout activities. I took up “serious mountain sports” including rock climbing, after moving to Bozeman, MT, with my first husband and two children, in 1979, at age 30. In the winter of 1980-81, I worked in a climbing shop in Laramie WY, where I ran the ski prep shop for the winter, and studied scuba diving. I enjoyed sailing with friends on Canyon Ferry Res. Fellow climber, Steve Schombel, and I, joined the Rocky Mountaineers in 1993, and I have held every office, including newsletter editor and the club archivist. In addition to cross country skiing, snowshoeing, hiking and occasional peak bagging, I have led raft trips on the Smith River and canoe trips on the Missouri, and enjoyed a multi-day horse packing trip to the Chinese Wall in the Bob Marshall Wilderness. Past exploits include spending time on Mt. Rainier and Longs Peak (no summits), everything from day hikes to multi day backpacking trips in Glacier and The Bob Marshall Complex. And can’t forget climbing the two highest points in the Republic Of Ireland. Today, I am mostly a leader of the club’s more easy trips, hiking, skiing and snowshoeing, but still like to explore places I haven’t been, before, even if they aren’t challenging. 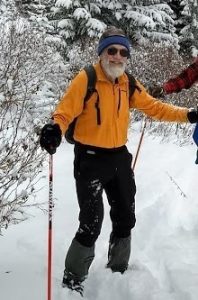 I grew up in Missoula where my father was a zoology professor and an avid hunter and fisherman.  I learned to love the outdoors as a boy scout and hunting with my father.  I left Missoula to attend Dartmouth College where I was active in the Dartmouth Outing Club which has a long history as one of the earliest and most active collegiate outing clubs.  Following Dartmouth, I earned a Ph.D. at the University of Wisconsin Madison where I joined the Hoofers Outing club.  The club had an active whitewater boating program where I helped the club pioneer the transition from aluminum canoes to closed fiberglass kayaks and canoes.  I met my wife Sally in the Hoofers.  Then I spent a year at the University of Utah and 13 years at Western Michigan University where we raised our two boys.  During this period I was an avid XC skier and citizen racer, and every summer the family visited my parents in Missoula where we did backpacking and hiking.  In 1983 we came back to Missoula where I and our family did lots of hiking, backpacking, hunting, bicycling, and XC skiing.  I joined the Rocky Mountaineers in 2004 when I created the club website.  Since then I have led many hiking trips and participated in easy scrambling climbs. I continue to be an active board member, maintain the website, and help with technology issues. 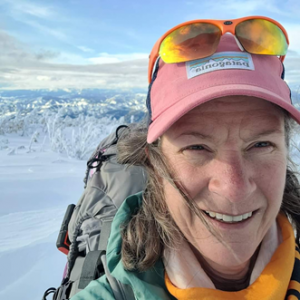 Candy grew up in northwest North Dakota and was always interested in the outdoors which was magnified after a junior high class trip to Glacier Park. She spent several summers leading youth trips for summer camps which led her to a year at Prescott College in the Outdoor Education program. She has permanently lived in Montana since the mid-80’s when She worked summers as a ranger in Glacier Park and winters on Big Mountain as a lift operator and ski host. She and her husband moved to the Missoula area in 1999, leaving in 2010 for family reasons. In 2017 she was finally able to return to Missoula when she was hired as a Paratransit Scheduler for Mountain Line. She loves doing anything outdoors especially hiking, biking and skiing of all types, and kayaking. It is always a joy for her to introduce others to the outdoors.

I grew up in a military family, moving from state to state and traveling across Europe.  I loved being outdoors from an early age and I spent most of my childhood exploring forests and crags.  After college I joined the Army and was introduced to rock climbing. I immediately fell in love with the sport.  Soon after that I introduced my girlfriend (now wife) to climbing and together we started developing our climbing and mountaineering skills.

I left the Army in 2016 and now I work as a structural engineer.  I take advantage of the travel required for my work to camp and climb in the western states.  My primary outdoor interests are mountaineering, trad climbing, trail running, volunteering for Search and Rescue, and long distance hiking (JMT and CDT).  I’m also trying to develop my skiing and ice climbing skills to open the door for new adventures.

Born and raised in Switzerland by an Italian father and Spanish mother.  Since 2013 she has made Missoula, Montana her home, where the mountains connect her to the past and provide challenges and adventures of their own.  She has since then been active in backcountry skiing, ski mountaineering, and alpine climbing. Has climbed in the Cordillera Blanca Peru, Denali National Park Alaska,  Red Rocks Nevada, Pioneer Mountains, Glacier National Park, Joshua Tree and Yosemite National Park California etc. She loves to venture out, especially off trail, exploring new adventures, by foot or mountain bike. She is certified EMT.

Fintan was born in Ireland but lived most of his life in Canada and the Western US. His wife Mary Ellen introduced him to backpacking after college and a few years later he also became interested in mountaineering.  While living in Coeur d’Alene, Idaho he completed a very thorough introductory mountaineering course with the Spokane Mountaineers. He has climbed in the Cascades, the Canadian Rockies, Tetons, Denali, and all over Montana. Besides mountaineering he also enjoys backcountry skiing, snowboarding, backpacking, ice climbing, and hunting.